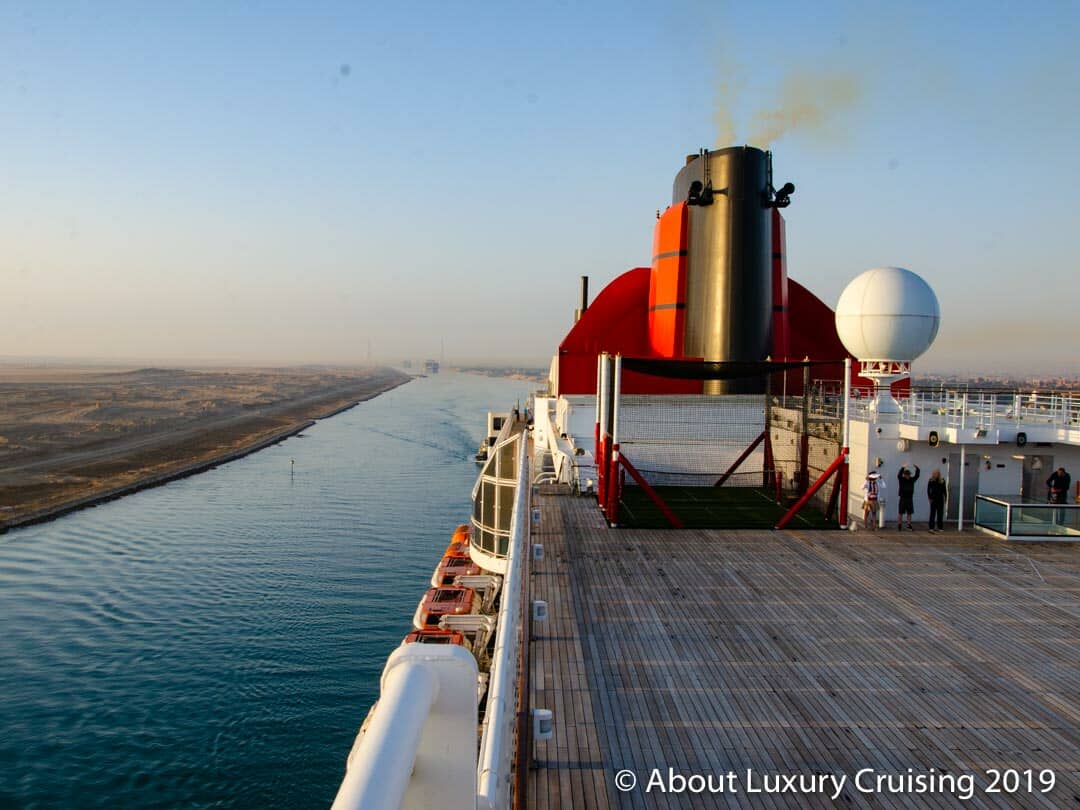 Part of our amazing cruise from Dubai to Southampton meant that we would complete our first Suez Canal transit. Expectations were for a magical voyage; one which has been on our bucket list for a long while. This being the the last sector of the Queen Mary 2 World Cruise of 2019 would make it even more special. Our very own Suez Canal Cruise. The Suez Canal, which is one of the world’s greatest feats of modern engineering, represents the culmination of centuries of effort to enhance trade and expand the empires of Egypt by connecting the Red Sea with with Mediterranean Sea.  It also had the effect of joining the Indian Ocean with the Atlantic Ocean.

The canal was completed in 1869 amid much fanfare and celebration when 2 small fleets, one originating in Port Said and the other from Port Suez met at the new town of Isalailia on 16th November 1869. Ownership of the canal remained in British and French hands until, in the wake of Egyptian independence, President Nasser nationalised the canal in 1956.

Over the past few years much development of the canal has taken place with new spurs being built to allow two way traffic. Traffic is under the supervision of the Suez Canal Authority (SCA) who manage movement through the canal and organise transits either north or south using convoys of ships. The total Length of the navigable canal is 192 KM and the distance from Port Said to Ismailia is 78 KM. and from Ismailia to Port Tewfik (Suez)  is 84KM. The maximum possible draft of ships is 58 ft.

Leaving the port of Aqaba, Jordan after visiting the Lost City of Petra and a relaxing day at sea our transit on the QM2 began at 4:30 am. We left our Red Sea anchorage in the Gulf of Suez as part of a convoy of 24 ships heading north. Ships travel in convoys which allows, in addition to protection, a smoother process due to the numerous ships and necessary by-passes along the canal.

The weather for our transit was forecast to be in the high 20’s with bright sun all day.  Fabulous really. The early morning light was stunning and to see the narrow entry to the canal was somewhat daunting but with the ships in the convoy well spaced and accompanied by tug boats we proceeded at a steady 6 knots for the expected 3 hours transit to Little Bitter Lake which then connects further north with the Great Bitter Lake. 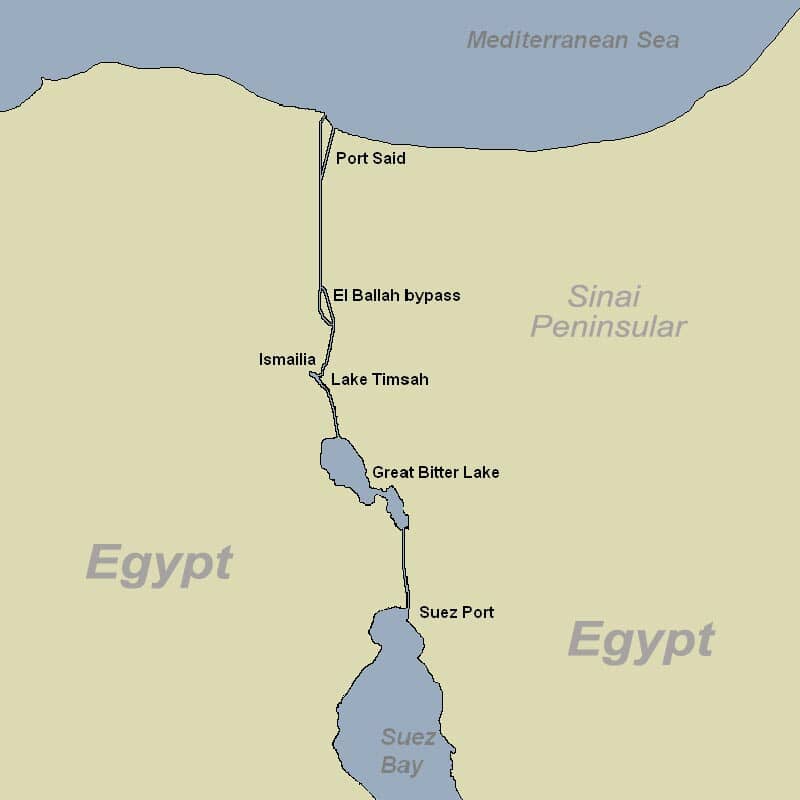 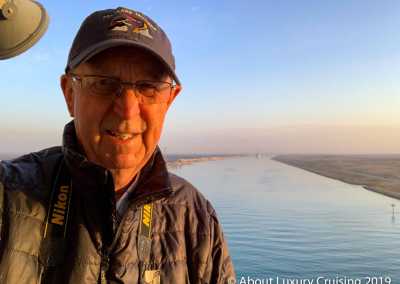 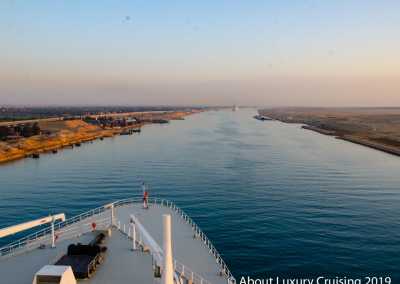 Entry to the Suez Canal 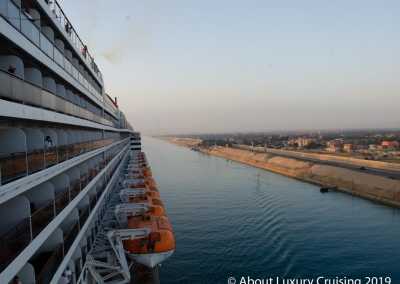 Sights along the SUEZ Canal

One side of the journey to reach the Bitter lakes is quite green on the African side, while the Sinai Peninsula side is almost completely barren. The green vegetation is because of an irrigation/water supply canal next to the main shipping Canal which was dug to provide water for the diggers of the canal in the 19th Century and it is still in use today. What is also very prominent along the whole length of the canal is the strong military infrastructure presence with stacked pontoons on the shore side.

It was fascinating during the transit to see so many different features of canal life. There were ferries crossing the canal between settlements either side of the canal and we often saw small fishing boats going about their business.

The Suez Canal was constructed in the way it is because the route could use three lakes which were already there. Lake Temsah, which was taken in use as a natural harbour for all the equipment of the SCA and the Little and Great Bitter Lakes which offered the option to create a split fairway where the North and Southbound ships could pass each other.

The 2014 extension made it possible to have two way traffic all the way from Port Said to the South side of the small Bitter Like (Al Buhayrah Al Morrah a Sughra). Between 1967 and 1975 when the canal was closed, 15 ships were stuck in the canal and they were all anchored in the Great Bitter Lake.

There are statues along the canal celebration the huge achievement of the workers who built the canal. 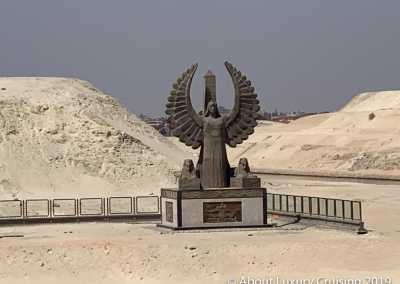 The Statue called Spirit of the Lake 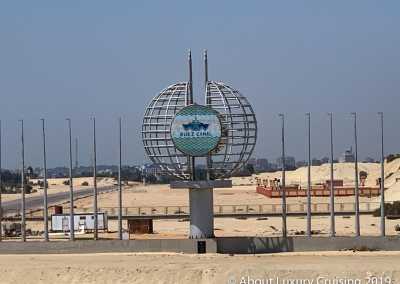 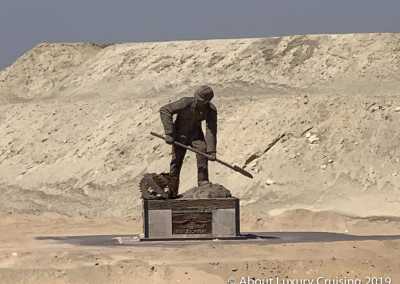 Stutue of Worker digging the Canal 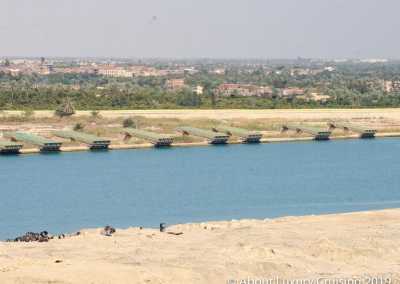 Pontoons for the military 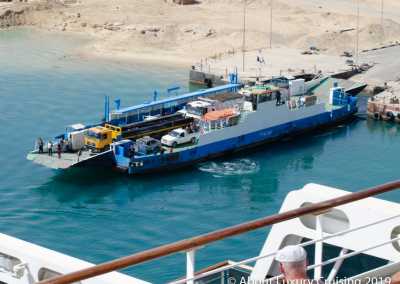 Ferries across the Suez 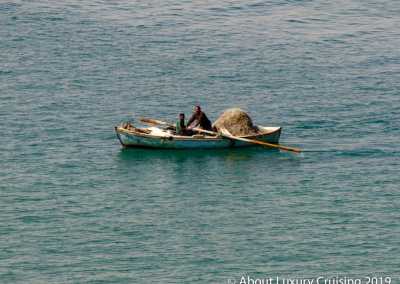 The SCA is expecting to need a lot more labour to maintain the canal plus an expected economic boom because of expansion of the canal. We don’t know if that is really going to happen as nearly all the traffic for the canal is for transit only, so the ships don’t stop. But all the apartments and the mosques are already there, The Egyptian Government has also announced that a new city will take the overflow of Cairo and the related area and they are very busy putting the necessary infrastructure in place including 7 new tunnels under the canal.

The sand that has been dug out for the widening and creating the new South to North Fairway of the canal has been deposited in the middle of the canal, creating an artificial range of Dunes which helps against the strong winds that can blow over the canal.

After the pilot change at Ismailia, it is 68 kilometers to open sea and the main point of interest is passing under the Friendship Bridge or Al Salaam (Peace) bridge.The bridge was constructed by the Egyptians and the Japanese and thus called the Friendship Bridge. Then it was called the Hosni Mubarak (the previous leader of Egypt) Bridge, but after his death, they changed it to the Al Salaam Bridge.

The 2nd fairway which runs parallel to the old Suez Canal, and serves the Northbound traffic, ends near Port Said where they had already dug a 2nd exit/ entrance. Port Said didn’t have room for container ships so a complete new port was built on the Sinai peninsula side with its own entrance /exit to the docks. Now with the 2nd fairway, the connection was made the northbound ships now exit on the east side and do not see much of the old entry to the Suez Canal. 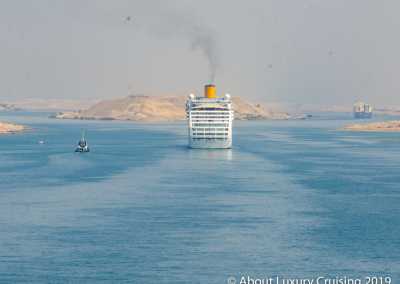 North Side of the Bitter Lakes with 2 canal fairways 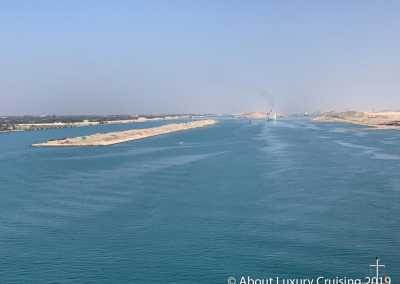 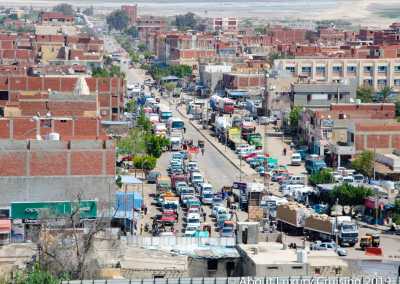 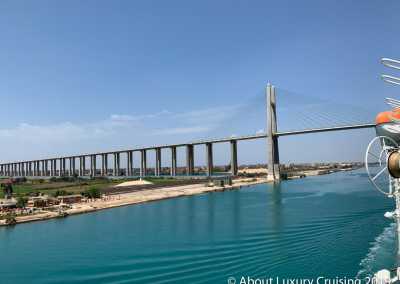 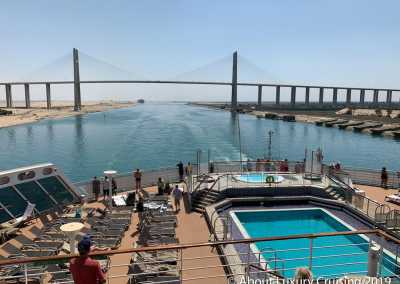 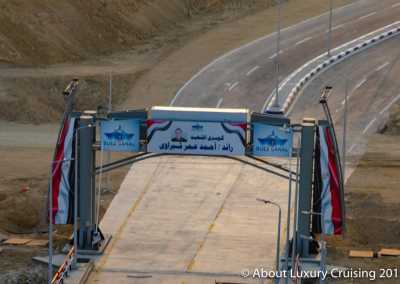 Development of the Suez Canal

One of the most Interesting developments along the canal includes The El Ferdan Railway Bridge which was was built as part of a major drive to develop the areas surrounding the Suez Canal. When completed it was the longest swing bridge in the world at 1100ft. However the new parallel 2nd canal which was excavated in 2014/2015, a short distance to the east, but without a bridge spanning it. Without a second bridge, the railway across El Ferdan bridge is a now dead end.

Instead of the bridge, which is still in place, a new railway tunnel in the Ismailia region (and another near Port Said) is planned in order to reconnect the to the rest of Egypt’s rail network. 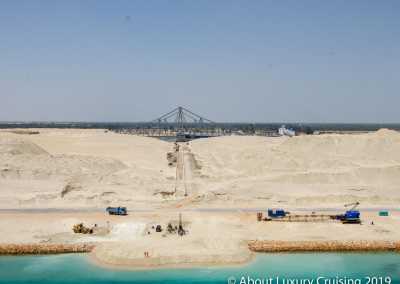 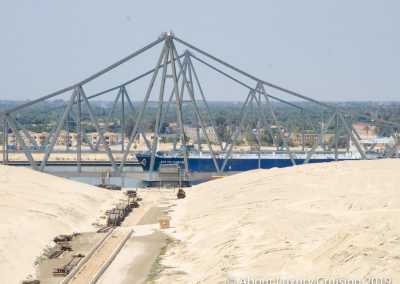 The Suez Canal Mega project was launched in 2014 with the aim of increasing the  role of the Suez Canal in international trade and to develop the cities of Port Said, Port Suez and Ismailia.

The project involved building the new Ismailia city, an industrial zone, fish farms, completing the technology valley, building seven new tunnels between Sinai and Ismailia and Port Said, improving five existing ports, and digging a new canal parallel to the Suez Canal. The new canal has increased the canal capacity from about 45 ships a day to 97 because ships can now sail in both directions at the same time for a greater proportion of the canal. The project transformed the canal into an important trading centre globally. It also built new facilities on the Suez Canal for logistic and ship services.

A fascinating journey for us and one which we loved. The Suez canal is not actually one of the 7 man made Wonders of the World, but it is a worthy runner up.