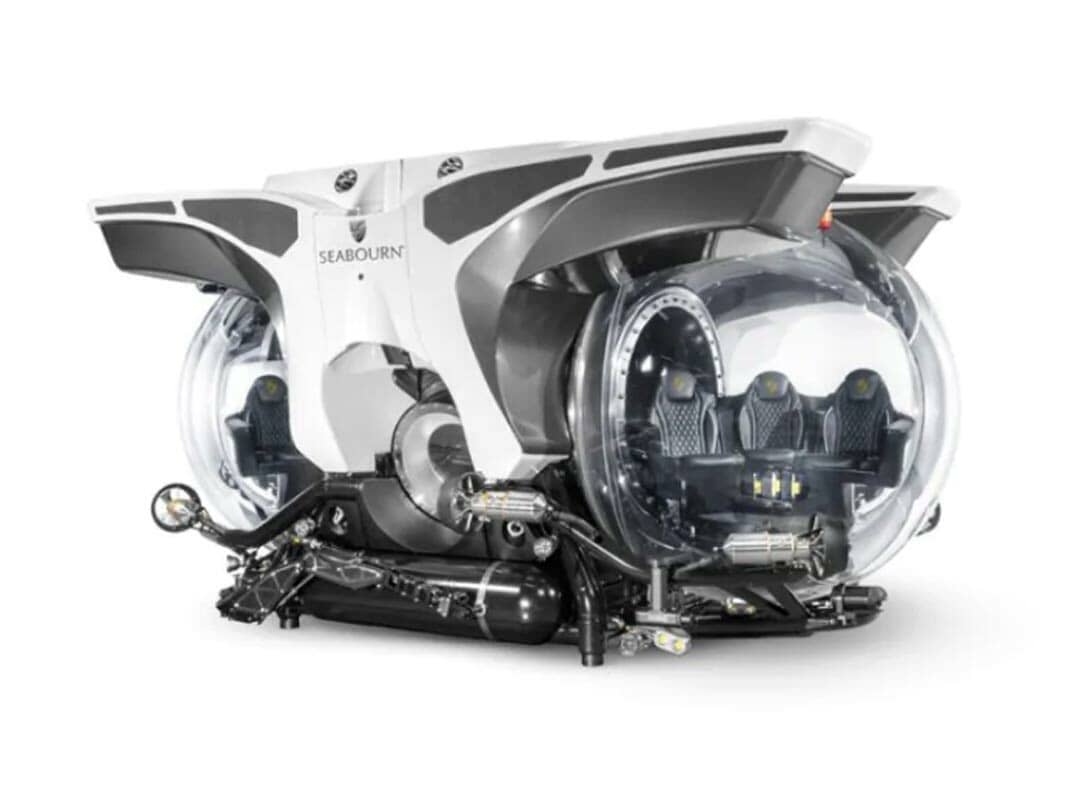 Seabourn, the world’s finest ultra-luxury cruise line, is preparing to take travellers into the depths of the ocean for the first time by revealing the design and details for its custom submarines that will operate excursions for an additional charge from the line’s two upcoming ultra-luxury purpose-built expedition ships. Both Seabourn Venture and her yet-to-be-named sister ship will sail to the far corners of the Earth carrying two U-Boat Worx Cruise Sub 7 subs designed specifically for Seabourn.

Each battery-powered Seabourn submarine will carry six guests as well as one pilot, who will guide the journey up to 300 meters beneath the surface to explore sunken wrecks, reefs, and view marine wildlife in their natural habitat. Guests are seated in two clear acrylic spheres flanking the centre pilot’s station, with an awe-inspiring perspective of the marine world just outside thanks to undisturbed and undistorted views in virtually all directions. The three passenger seats in each sphere are mounted on a rotating platform that can turn for best sightlines.

“The undersea world is often considered as the last great frontier on Earth, with more than 80 percent of the underwater realm remaining unmapped, unobserved, and unexplored according to the U.S. National Oceanic and Atmospheric Administration,” said Robin West, vice president of Expedition Operations for Seabourn. “With these subs, we’re going to take our guests to places that few have ever seen firsthand, leaving them with a perspective on the world around us that is jaw-dropping and will create stories to last a lifetime.”

To maximize the guest experience, the seabourn submarines will be outfitted with a host of optional equipment to enhance this once-in-a-lifetime opportunity. A 4k underwater video camera system will record the world outside while an internal video recording system will capture imagery of guests inside and their direct surroundings. Video footage can then be downloaded and projected on large screens in the Discovery Center during lectures aboard the ships.

A six-function manipulator arm capable of lifting up to 32 kg (about 70 pounds) will also be mounted on the side of the sub. In keeping with the luxury experience found on Seabourn, each sub on both ships will be outfitted with custom embroidered leather upholstery, two air conditioning systems, a Bluetooth stereo system, and champagne chiller for guests looking to toast their voyage of discovery.

The Seabourn Submarines will be operated multiple times per day in regions around the world where conditions are suitable. They will be equipped with underwater LED flood/spotlights, imaging sonar that acts as a second set of eyes, and an advanced underwater tracking and navigation system.

Seabourn Venture is scheduled to launch in June 2021, with a second yet-to-be-named sister ship slated to launch in May 2022. The ships are being designed from conception for expedition travel blended with ultra-luxury and personalized service by leading travel experts and seasoned professionals with great depth of experience in the expedition, hospitality, and luxury cruising markets.

Between July 2021 and April 2022, Seabourn Venture will visit a vast number of breathtaking locations and remote destinations in the Arctic and Antarctica, as well as in the Amazon, Caribbean, Central and South America and more, offering guests the unique opportunity to experience ultra-luxury expedition cruising and exhilarating adventures.

The ship is scheduled to visit more than 150 unique and fascinating destinations across the globe – many of which few travellers have ever been – and over 65 new or notable destinations with a multitude of new and compelling expedition experiences. The itineraries, fares and additional details of Seabourn Venture’s inaugural year are available at www.seabourn.com.

Both ships will be designed and built for diverse environments to PC6 Polar Class standards and will include a plethora of modern hardware and technology that will extend the ships global deployment and capabilities. The ships will also be designed to carry a number of kayaks and 24 Zodiacs that can accommodate all onboard guests at once, which will allow for a truly immersive experience. Each ship will feature 132 luxurious oceanfront veranda suites. More details and full-colour renderings of the ship and its interior spaces will be released in the months ahead.

Seabourn continues to represent the pinnacle of ultra-luxury travel with intimate ships offering key elements that set the line apart: spacious, thoughtfully appointed suites, many with verandas and all 100% oceanfront; superb dining in a choice of venues; complimentary premium spirits and fine wines available on board at all times; award-winning service and a relaxed, sociable atmosphere that makes guests feel right at home on board. The ships travel the globe to many of the world’s most desirable destinations, including marquee cities, more than 170 UNESCO World Heritage Sites, and lesser-known ports and hideaways.