CRUISING THE EASTERN CAPE WITH SEABOURN

4TH JANUARY – CAPE TOWN, SOUTH AFRICA
Our Seabourn Sojourn Cruise Review was part of an “Extended Explorations” cruise up the East Coast of Africa which originated in Cape Town, South Africa. These Extended Explorations seem to be segments of what used to be called a World Cruise. This particular itinerary is great for those who are interested in African Safari tours and Seabourn laid on some very special excursions.  This also gives a much-needed boost to South African Tourism.

What a fabulous place to pre-cruise. Staying at the Cape Grace Hotel in the Victoria & Albert Waterfront was just perfect. See our thoughts on Cape Grace Hotel by reading our review here. Within walking distance of the array of Victoria & Albert waterfront shops and restaurants, the hotel is in the ideal spot. Eating out was a great experience with so many quality restaurants to choose from and inexpensive too.

5TH JANUARY
A 5-minute drive from the hotel to the berth, we joined the Seabourn Sojourn and were treated to the usual special Seabourn moments and the customary glass of champagne. Pure Seabourn Moments.

Our first day onboard was an overnight stay in Cape Town and we decided that as we had previuosly taken the trip to the top of Table Mountain on an earlier adventure, we would try the Seabourn Robben Island experience.

As it turns out this was not a good trip and Seabourn were quick to refund the costs without question. 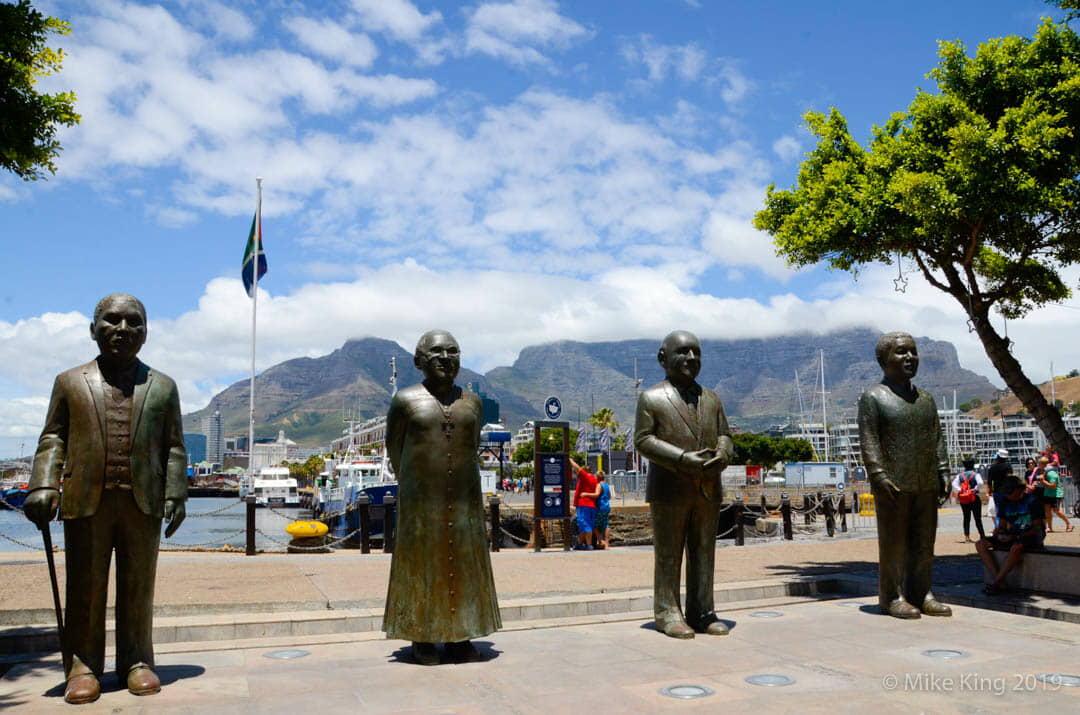 6TH JANUARY – SEA DAY
A well-deserved lie in today, with just time to spare to get a snatched breakfast, then into the Grand Salon for the Port talks which are always worth attending.  Today it was Port Elizabeth, Durban, Richards Bay, Maputo. 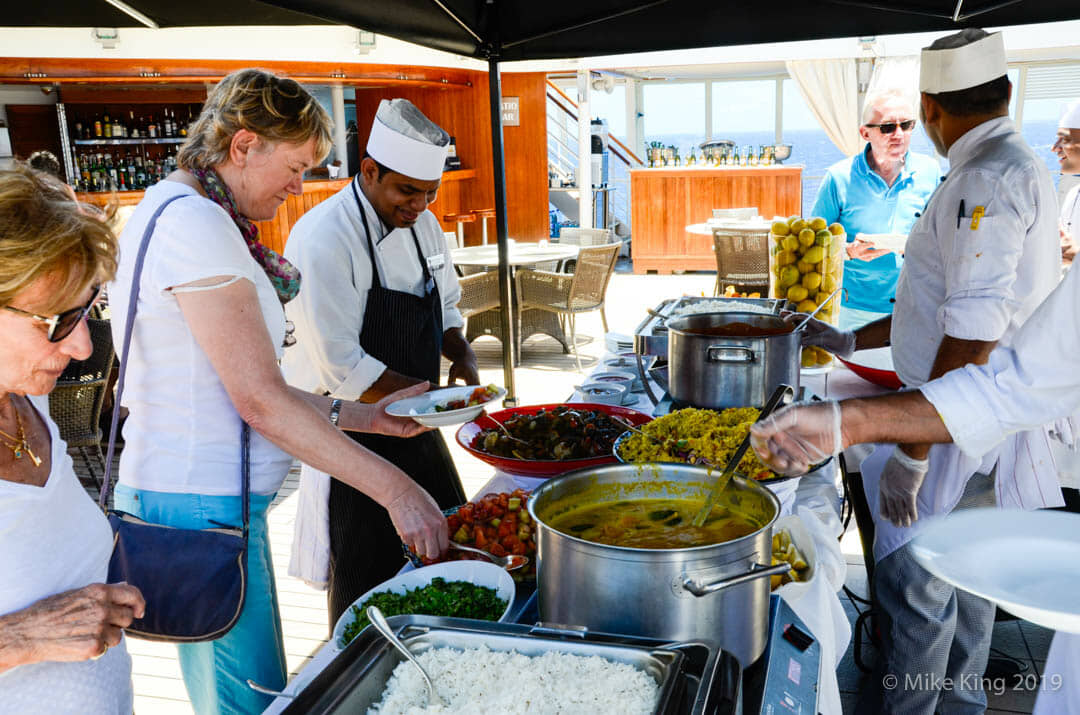 Curry Lunch on the Pool Deck 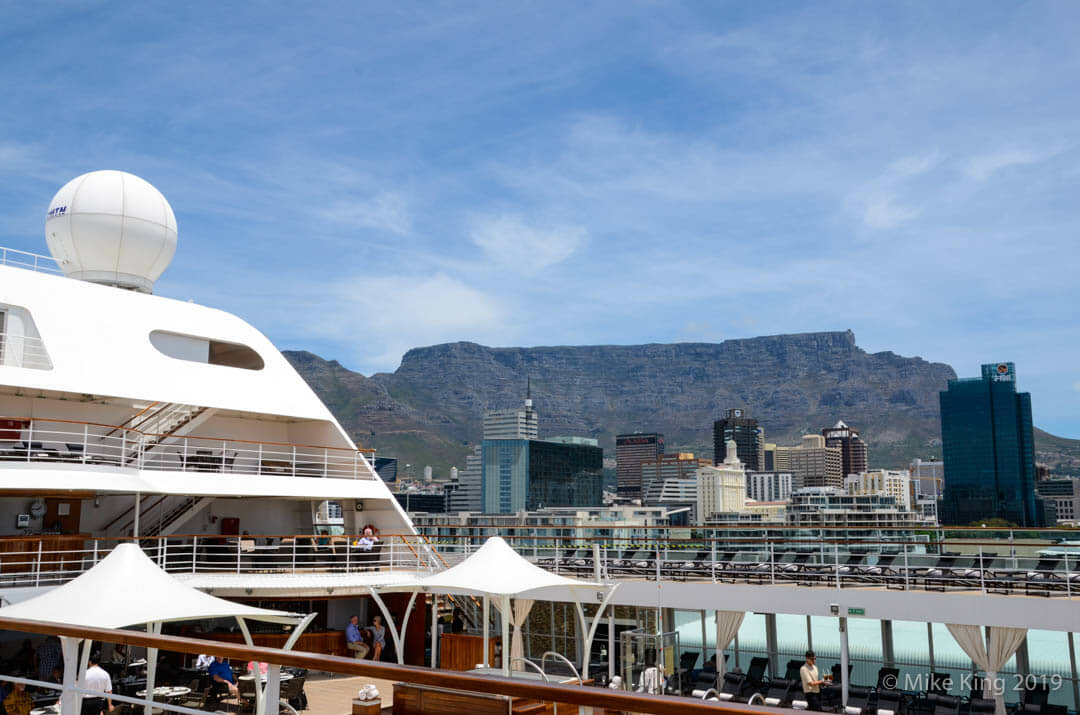 Table Mountain in the Background

A relaxing day by the pool and some sunbathing filled the rest of the morning, and as the Patio Grill was close by, a small lunch was in order!!! Which of course included the famous Seabourn fries.

A very tiring day needs a siesta, to be followed by a tuition class in Ballroom Dancing.  Four left feet and only half a brain ensured that we got in a bit of muddle.

Captains evening, so it was a formal night with a cracking dinner, well done Chef Neal.  Most had the Beef Wellington or stuffed quail, it was absolutely beautiful, the tarragon stuffing was divine.  Calvados souffle to follow.

7th JANUARY
Not too early a start today for the Addo Elephant Park trip.  Coach took just over an hour to get to the Park where we boarded covered safari jeeps to travel around the massive park.  Thankfully a lot of it was by tarmacked road so It was not too bumpy, it was only the last section which was off-road travel.

Sightings of the Elephants were mainly at the waterholes, where we were also treated to viewing warthogs and their babies, several herds of elephants with their young, zebras and a fleeting glimpse of an impala.    Keeping wildlife in their natural surroundings is such a privilege. 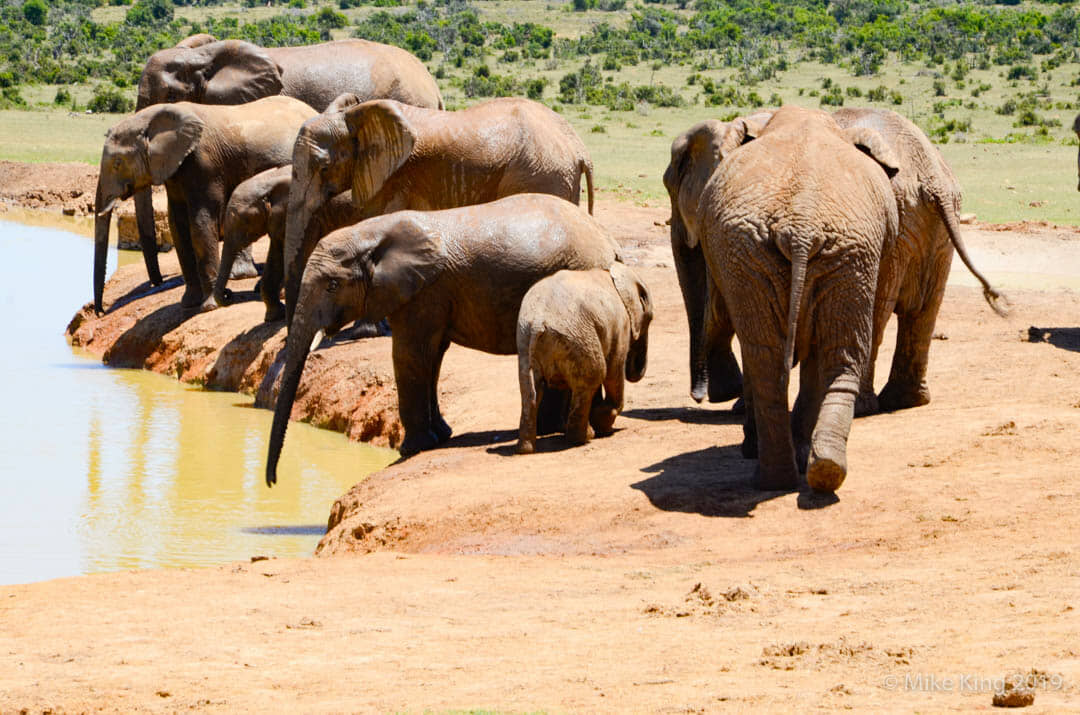 8TH JANUARY
East London sits between the Buffalo and Nahoon rivers on the south-eastern coast of South Africa, about 1,000km east of Cape Town. The city boasts a diverse economic base, with a motor vehicle and component manufacturing of primary importance, followed by industrial and agricultural activities. East London is a gateway to the Sunshine Coast to its south and the Wild Coast to its north. Along with Bisho and King William’s Town, it falls within the Buffalo City Municipality.

Today is almost a sea day, with a very short stop at East London. Short interlude with a bus shuttle to Hemmingway Shopping Mall in East London, apparently the safest place to go in this area.   It was quite odd in an area of complete poverty, a shiny mall with two floors of shops.  Mainly well to do people shopping.   Clothes were not particularly stylish, prices were very cheap, but quality not of European standard. Not really sure why cruise ships actually stop here?  Sea day tomorrow en route to Durban.

10TH JANUARY
Breakfast in the Restaurant today as could not face the bedlam of the Collonade. Very civilised expereince.

Caught the Shuttle bus to Ushaka Shopping complex and a walk along the beach and boardwalk.  So hot and busy of course as it is a Saturday.   Lots of Zulu entertainment in the shopping complex. 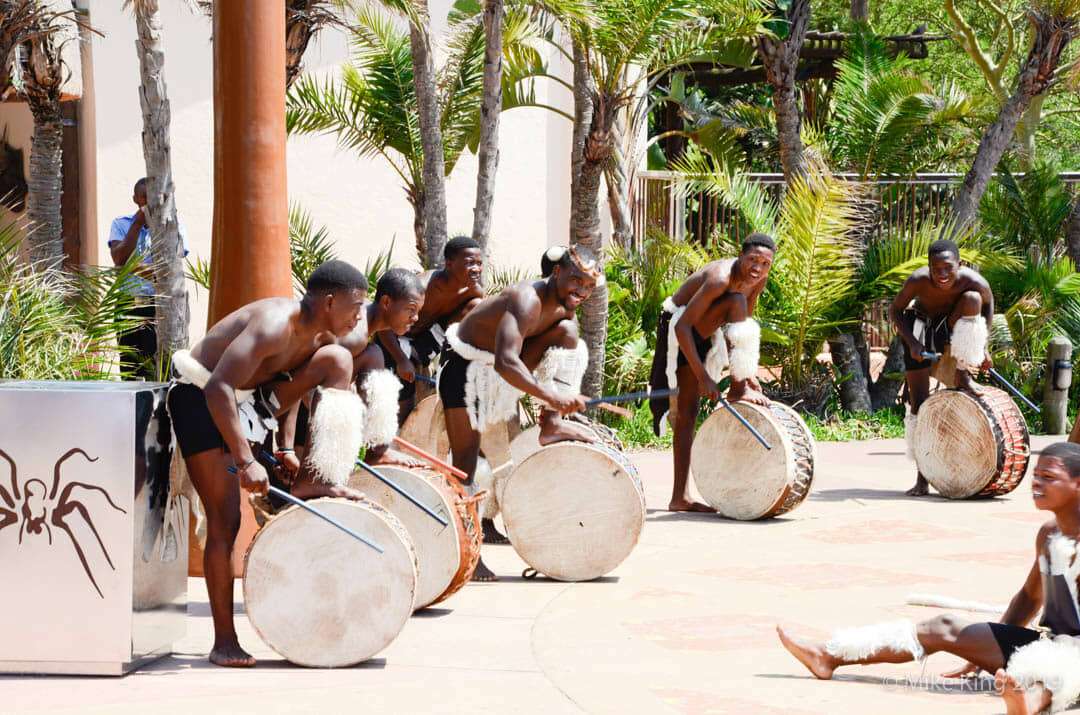 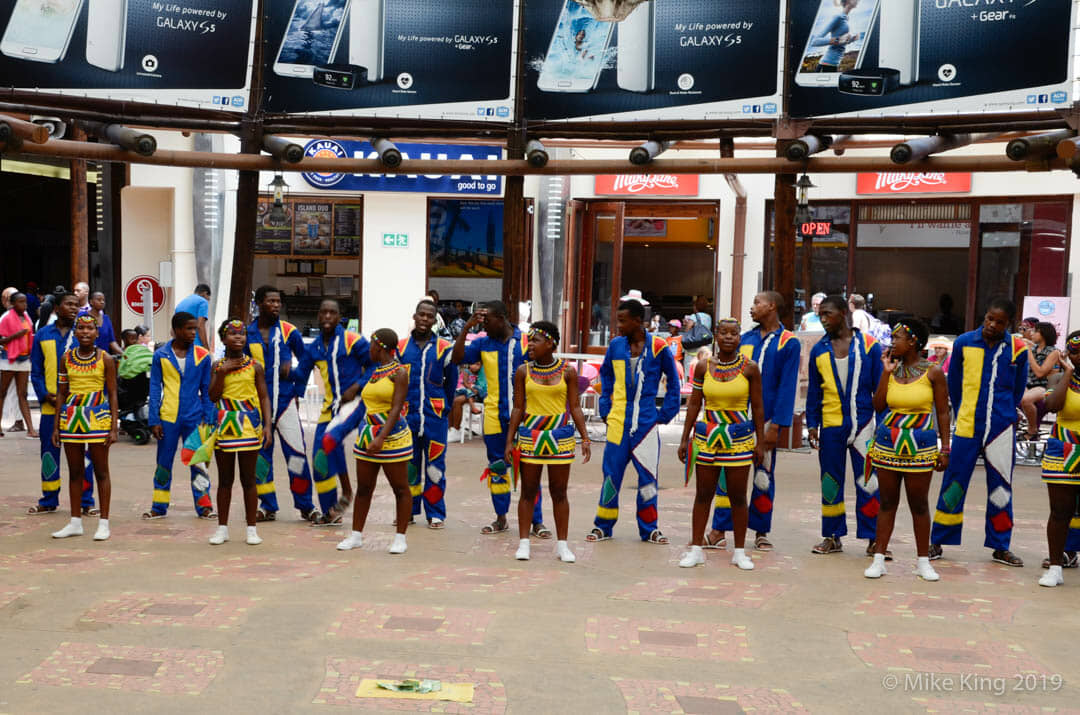 Poolside at 5pm saw the very fit local Indlondlo Zulu Dance Group perform, accompanied by a trio of drummers.   Aged between 11 and 18, they included acrobatics in their dance routine.  Noisy, charismatic, energetic, intimidating at times,  the best entertainment on the ship so far.

11TH JANUARY
Certainly, not much to see, but a shuttle bus took us into the Boardwalk Mall, which was extensive.   Should have taken more Rand to spend, but hey ho.  The shuttle then took us to the Marina Tuzi Gazi where we had a walk around for 20 minutes and saw a very old Voyages of Discovery ship in dock.   Pleased we were with Seabourn.

Unfortunately the Seabourn Sojourn was docked next to a coal yard at the port and whenever the wind direction changed we were all inhaling coal dust and all the decks were soon covered in dust. Not one of our best Seabourn moments.

The pool was 32 degrees, so very pleasant for swimming and a very warm day for sun-worshipping this afternoon.

Evening pre-dinner show on the Pool Deck given by dancers Sergii and Anastasia taken from the Lion King. African Dinner in the Collonade.  Very well done.  A lot of effort put in by the catering staff with several African delights such as Biltong.

13TH JANUARY
A glimpse of Mozambique (malaria country) tour took most of the morning up, a flash sitting of the new Railway Station, fruit, veg and fish market, a fishing museum, souvenir market, we viewed the Catholic Cathedral ourselves (very plain and ordinary for a cathedral), except the pews, were decorated for a forthcoming wedding.   Hassling took place all along the route with guys trying to get in the bus to sell their wares.  Pleased we set foot on Mozambican soil, but won’t return.   The Chinese influence is all too clear here, their money providing new buildings everywhere.  The Chinese Embassy, a grand affair, was right next door to the President’s Palace. 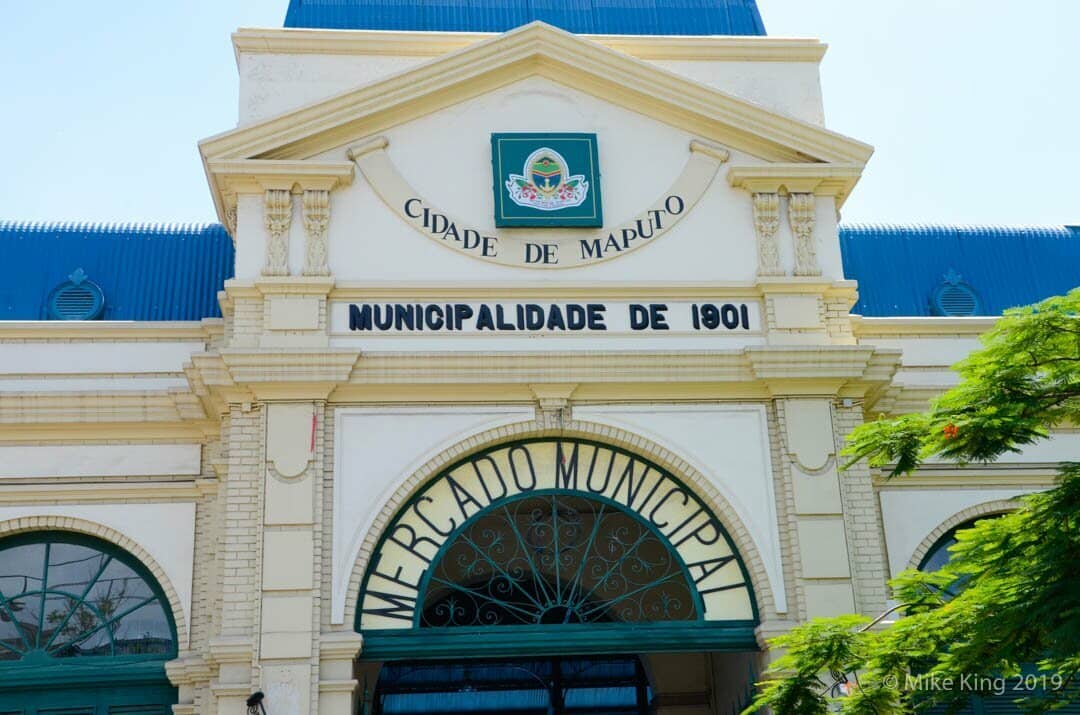 14th JANUARY
A sea day, so a bit more relaxed. Tour Destinations talk on Madagascar and Reunion.  Don’t think we will be going on tour as they are 8 hours long.

Chef Neal prepared an Indian feast Poolside at lunchtime, so delicious.  Chicken curry and shrimp curry. They had to be tasted to be believed.   The first curry we have had in a long while, so delicious.

Formal tonight with the 12-course tasting menu. Spot On.

15th JANUARY
A Sea day.    A beautiful day for relaxing around the pool as there was a breeze which allowed one to sit in the sun for longer.  Made the most of today as the weather is on the turn – a cyclone with strong winds and heavy rain in our path is forecast.

Today we should have been in Madagascar but due to the weather conditions with 2 cyclones CHEDZA and BANSI in the area, we were unable to go into port as the harbour master has closed the harbour to all ships. So we now have another day at sea on our way to La Possession, Reunion.  As a large number of guests (us included) were doing this segment in order to go to Madagascar to see the lemurs, you can imagine there are a lot of not so happy campers on board at the moment. But it has to be said that Captain Hamish Elliott did a wonderful job avoiding the cyclones – not an easy task.

The announcement has been made that Reunion’s harbour is also now closed to ships, so we are sailing on past, making our way to Mauritius and staying two days instead of one. 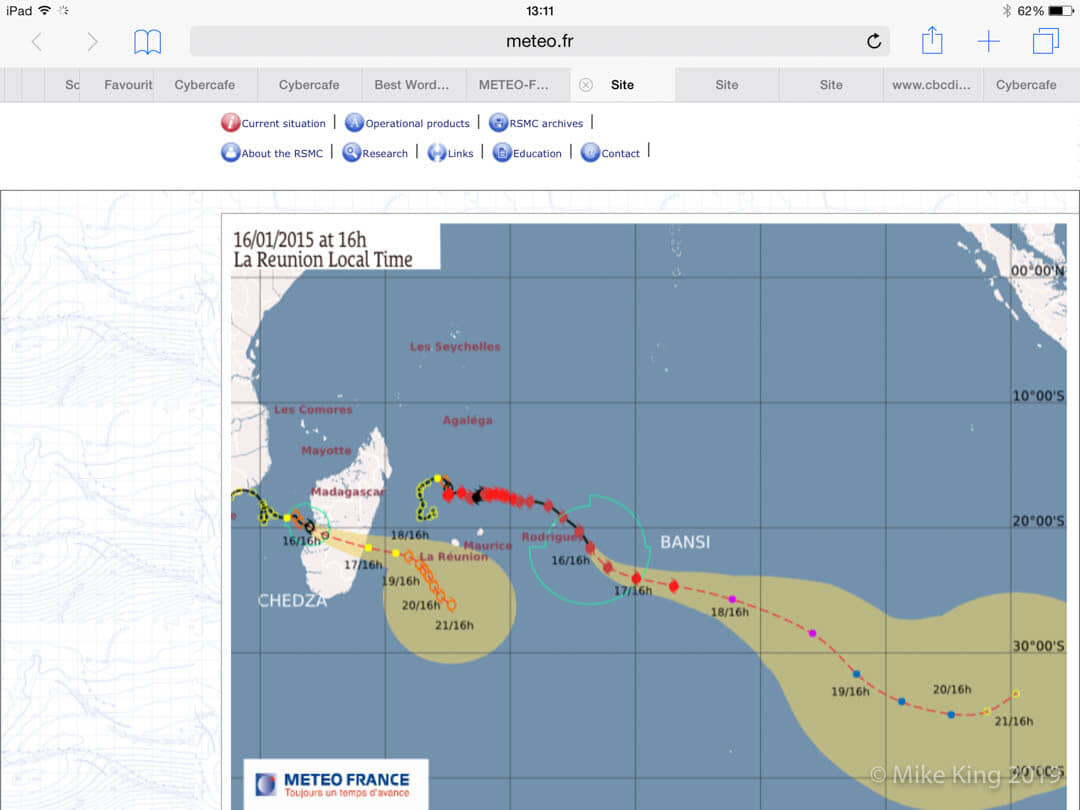 17TH JANUARY
Yet another sea day.  Dancing was cancelled due to unstable conditions on the dance floor.   We are travelling fast, trying to get in ahead of the cyclones.

Colonnade dinner, beautifully warm outside on the deck with a wonderful view of Reunion as we sailed past.  One island we were due to stop at, but the cyclone which is expected to reach the island at Midnight would have battered the ship in port.

18TH JANUARY
Arrived in Mauritius, overcast and showery but very hot!   We didn’t have a tour today, so walked to the Waterfront complex, which because it was Sunday was virtually all closed, except for shops run by Indians. It was extremely hot and humid and Mike was not feeling too clever, however, we walked nearly 10,000 steps so good exercise.

Really good entertainers and well suited for this cruise. 10/10.

19TH JANUARY
Our second day in Mauritius.  We were due to go on a morning tour around the island but Mike had a rough night with man flu, so we skipped it.   Went instead to the Waterfront to get some pharmacy supplies.

The sun was out, it was so humid when we returned to the ship, we were soaked through, so had to shower and wring our clothes out. Mauritius- not sure….

All Our Cruise Secrets for FREE

Joining this list will be your best decision ever. We send monthly emails with news, cruise tips and advice all designed to help you get more from your cruise. No Spam, we promise.