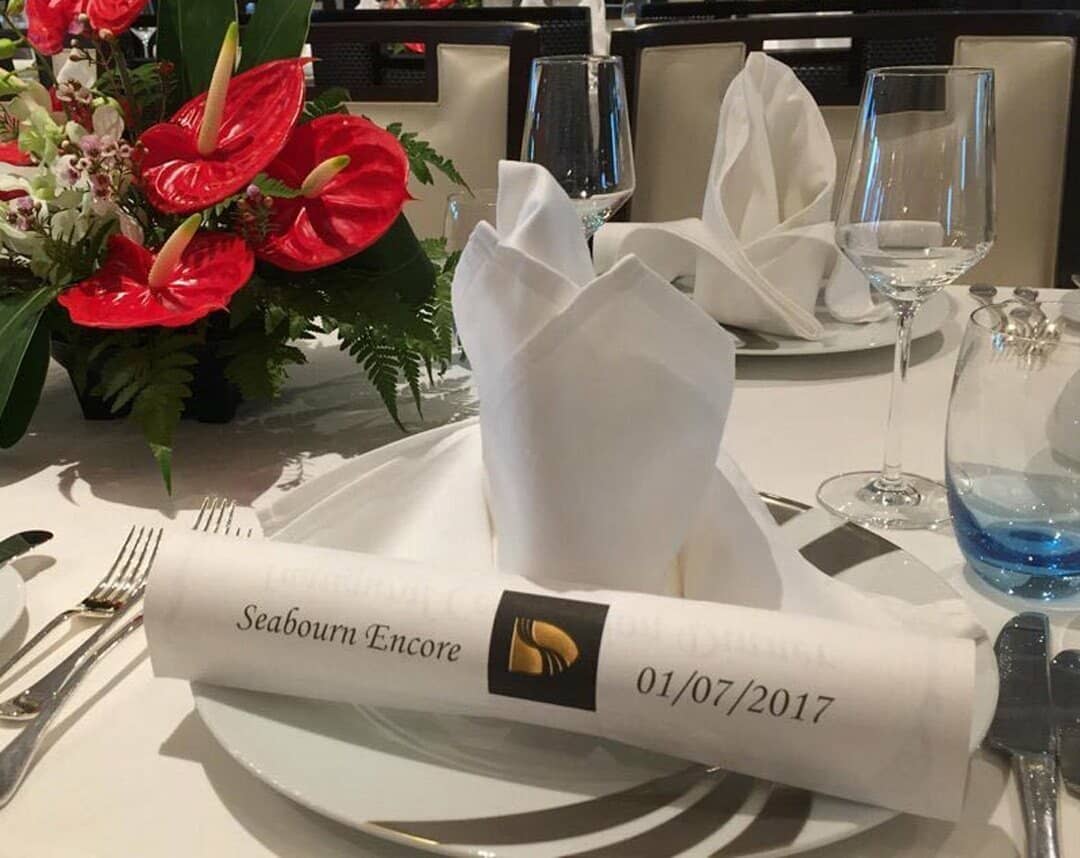 Singapore was the venue for the christening of the Seabourn Encore at a festive evening ceremony at the Marina Bay Cruise Terminal.

International recording artist and best-selling soprano Sarah Brightman presided over the naming ceremony as godmother of the new 600 passenger ship which we were lucky enough to witness and enjoy the inaugural voyage from Singapore to Sydney Australia. Encore is the first of two new all-suite vessels for Seabourn.

Having experienced the christening in London of the Seabourn Sojourn, it was going to be interesting to compare the two celebrations, but most of all enjoy the whole experience.

After the christening we were lucky enough to be experiencing the inaugural voyage of this wonderful new ship. 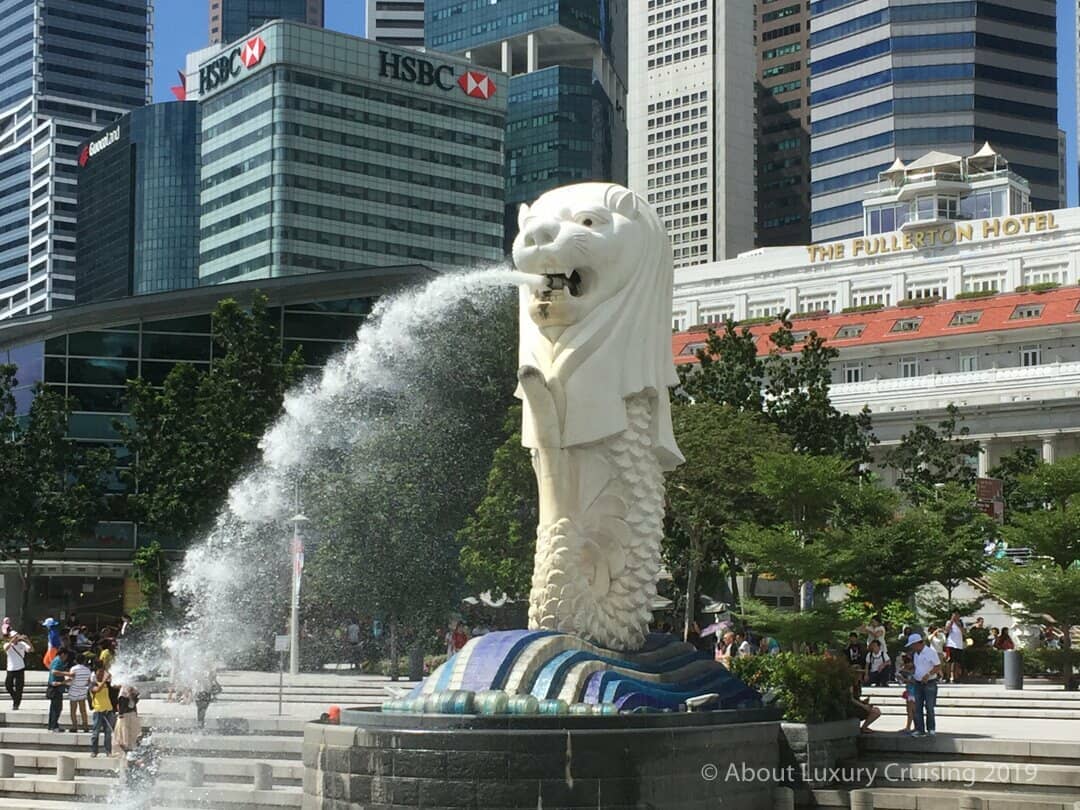 The Merlion is a mythical creature with a lion’s head and the body of a fish that is widely used as a mascot and national personification of Singapore.

The celebrations and christening were somewhat unusual being held inside the Marina Bay cruise terminal where were couldn’t even see this ship! However the pre-event entertainment by local Singaporeans was amazing. The actual christening was performed by Sarah Brightman as a projection screen showed the climactic moment when the obligatory bottle of champagne was sent smashing against the bow of the ship, in the time-honored ship christening tradition. 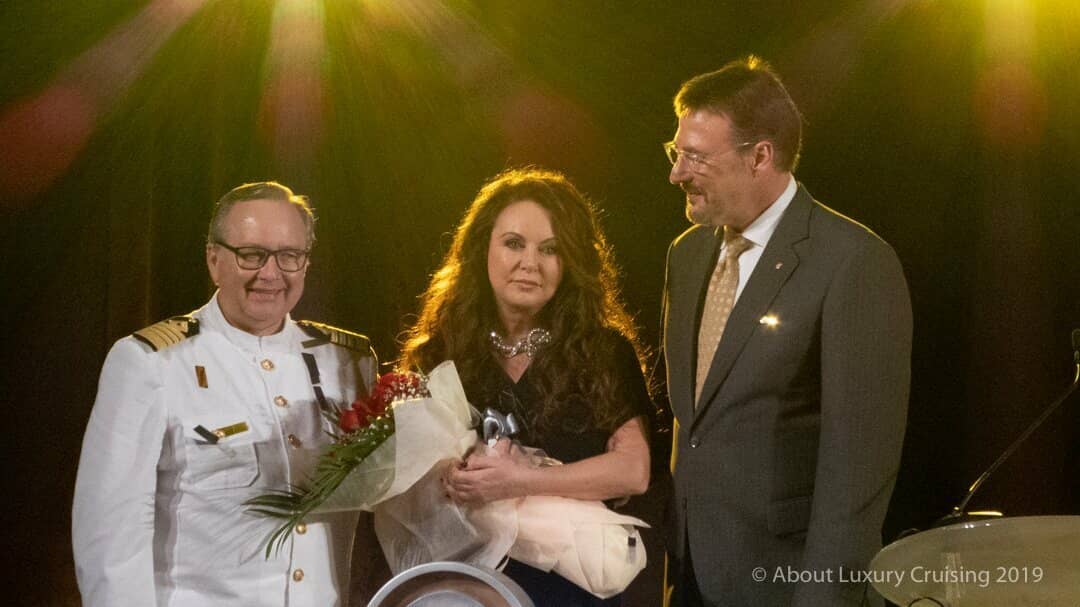 The launch of Seabourn Encore marks the start of a new era of ultra-luxury cruising,” said Richard Meadows, President of Seabourn. “Seabourn Encore marks a major step forward in terms of growth for our company. This ship is stunningly beautiful and I know guests are going to be absolutely captivated as they step aboard and see it first hand.

Following the naming ceremony, we departed departed on the “Official” Inaugural Voyage, a 10-day Gems of the Java Sea cruise, bound for Bali and then a 16-day Great Barrier Reef & Gold Coast Australia cruise finally ending up in Sydney. After a passage to New Zealand, the ship then reverses the earlier 10-day Gems of the Java Sea cruise to Singapore, proceeds on a 16-day Jewels of India & Arabia cruise to Dubai, and finishes her first season with a 19-day Arabian Gems & Holy Land voyage before ending her winter season at Athens on 5th May from where she departed.

Seabourn Encore will then spend summer 2017 in the Mediterranean, offering rich and diverse itineraries including a 7-day Greek & Italian Jewels cruise departing from Piraeus (Athens), Greece on 6th May, followed by a 7-day Riviera Allure voyage departing Civitavecchia (Rome), Italy on 13th May. She will go on to offer a series of 7-, 10-, and 14-day cruises throughout the region, including a dynamic Mediterranean Moments itinerary that departs Barcelona (Spain) on June 3 and makes stops along the charming cities and coastal villages of France, Monaco, Italy and Greece. In August, the ship will finish summer with a 10- or 20-Day UNESCO Gems of the Western Mediterranean cruise, arriving in Barcelona, Spain, on 13th September for the start of the autumn season.

A new production show, ‘An Evening with Tim Rice’, created exclusively for Seabourn in association with Belinda King Creative Productions, was also debuted on board in the ship’s Grand Salon with Sir Tim Rice personally narrating the show during the inaugural voyage.  One of the best shows we have ever seen of a cruise ship.  Seabourn Encore also features “The Grill” by Thomas Keller, a restaurant inspired by the classic American chophouse that first opened on Seabourn Quest last year.

The first of 2 new Ships

Seabourn Encore is the fourth ultra-luxury vessel to join the Seabourn fleet and the first of two ships to be designed by hospitality design icon Adam D. Tihany. The second, Seabourn Ovation, is currently under construction and is scheduled to launch in spring 2018 with its Inaugural Voyage planned for 5th May from Venice to Barcelona.

Intended by Tihany “to feel more like a luxury yacht,” Seabourn Encore features modern design elements and innovations in keeping with Seabourn’s reputation for understated elegance, as well as one additional deck and newly expanded public areas. New features include The Retreat, a secluded for-charge sanctuary for guests to stretch out and relax in private cabanas, and Sushi, a one-of-a-kind dining destination found on no other ship in the Seabourn fleet.

With the inaugural voyage, Seabourn Encore is also marking the formal debut of several new on-board partner programs. Spa and Wellness with Dr. Andrew Weil is being introduced in partnership with The Onboard Spa by Steiner, offering guests a holistic spa and wellness experience that integrates physical, social, environmental and spiritual well-being.