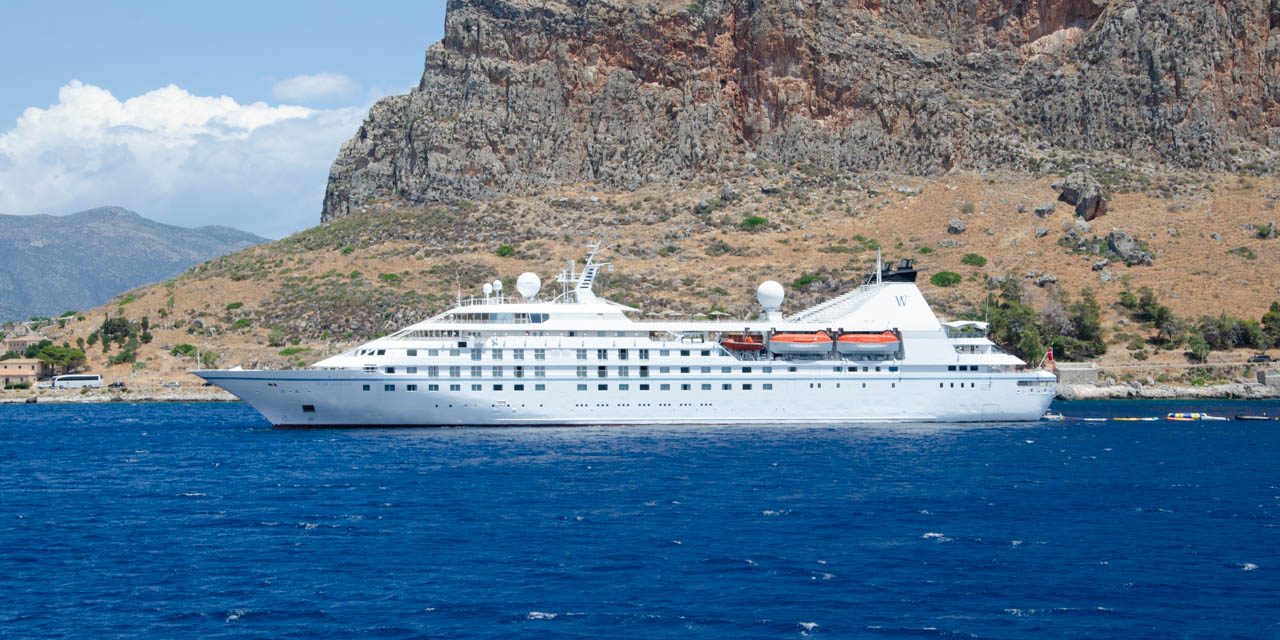 We recently had the opportunity to sail on the Star Legend which was one of the small Seabourn ships acquired by Windstar Cruises in 2015? After a $8.5m refit the Star Legend entered service in 2016.

Stepping on-board in Piraeus (Athens) for our 7 day cruise to Rome, it felt like we had just boarded our own private yacht.  No queues, No hassle, just a simple and straightforward welcome on-board.  With just 106 suites (yes suites not cabins or staterooms) and a maximum of 212 passengers the personal attention you receive from the crew is hard to beat.

Movie goers may recognize Star Legend for her film role , as Seabourn Legend, in the 1997 film Speed 2: Cruise Control. 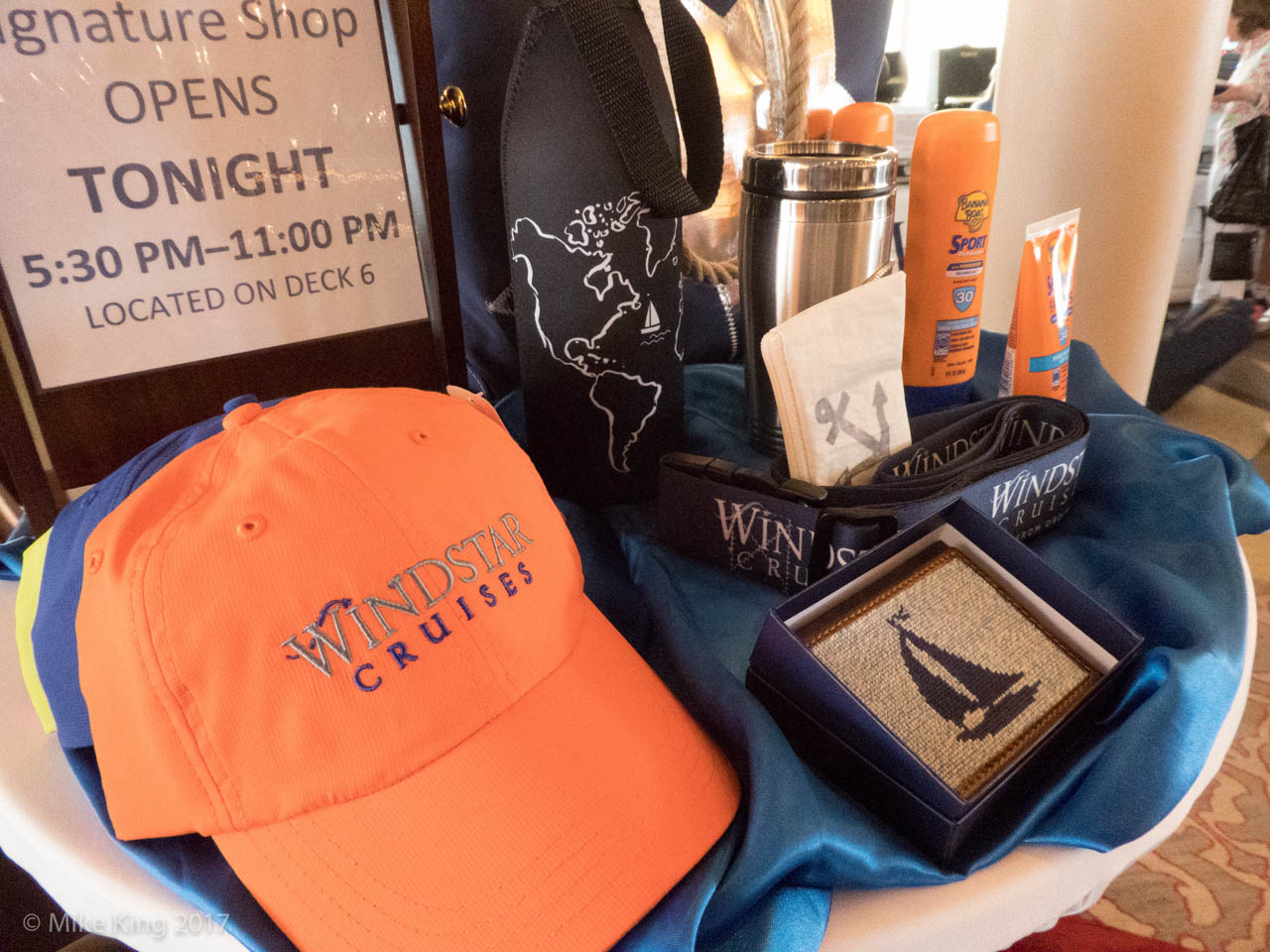 This is what memories are made of

We had previously sailed on the Star Legend when it was part of the Seabourn fleet.  Fondly remebered as one of the three small Seabourn Ships or “sisters” the Star Legend had been upgraded to reflect the more relaxed style of cruising offered by Windstar. The ship had still kept its charm and style that had set these ships apart from the rest of the cruising world.

Seabourn Spirit, Seabourn Pride and Seabourn Legend were purchased by Windstar Cruises in 2014 and 2015, respectively. These vessels became Star Breeze, Star Pride and Star Legend when they entered service for Windstar. Recently refitted by Seabourn before the sale, the ships did require upgrades to the public spaces and staterooms onboard. Windstar however, chose to embark on a multi-million-dollar refitting campaign that would make each of these three small ships full of Windstar character.

One feature that wasn’t removed were the ship’s retractable marina platforms mounted at the stern, which have been heavily copied by other cruise lines ever since. This fits in perfectly with the Windstar mantra; each of the line’s existing three sail-motor ships includes a retractable marina.

Before we get into our review of the Star Legend, we just have to mention the Windstar staff. Our experience was refreshingly relaxing, fun and extremenly attentive. The whole crew seem to be happy and a happy crew translates into happy guests. From our room steward to the bar staff, the resturant staff and the officers all had a very positive vibe about them and nothing was too much trouble for them. 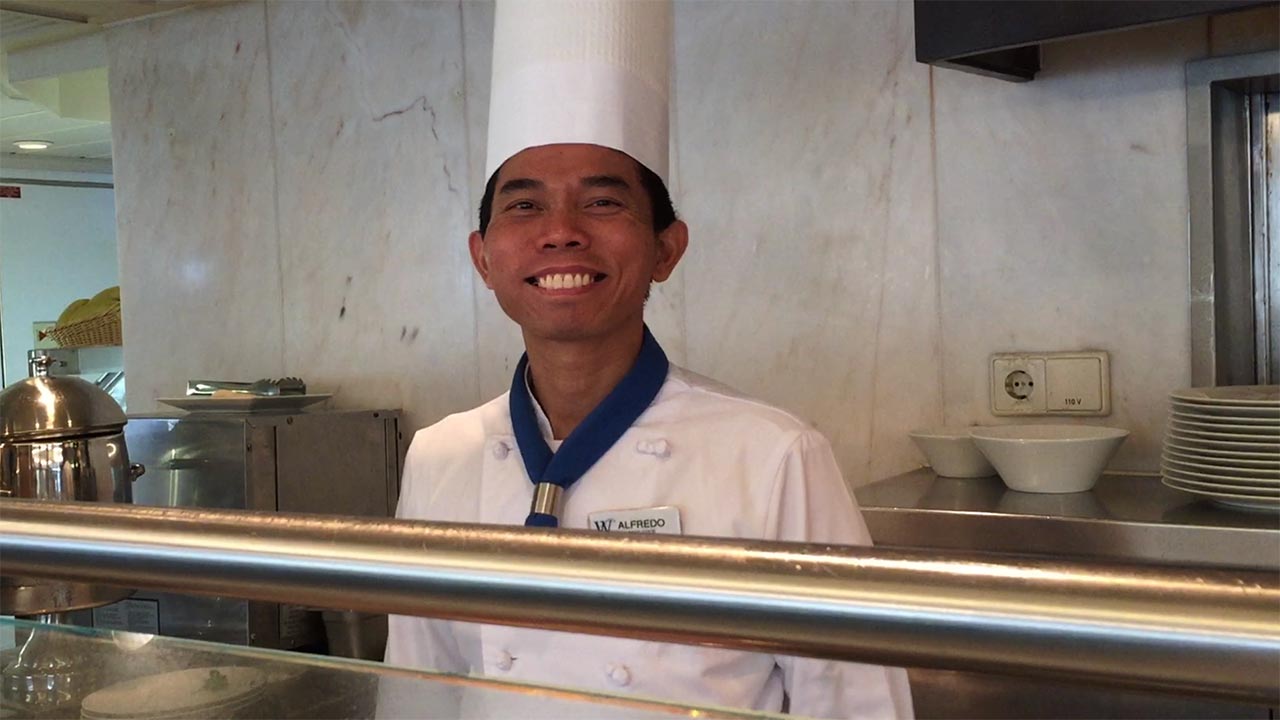 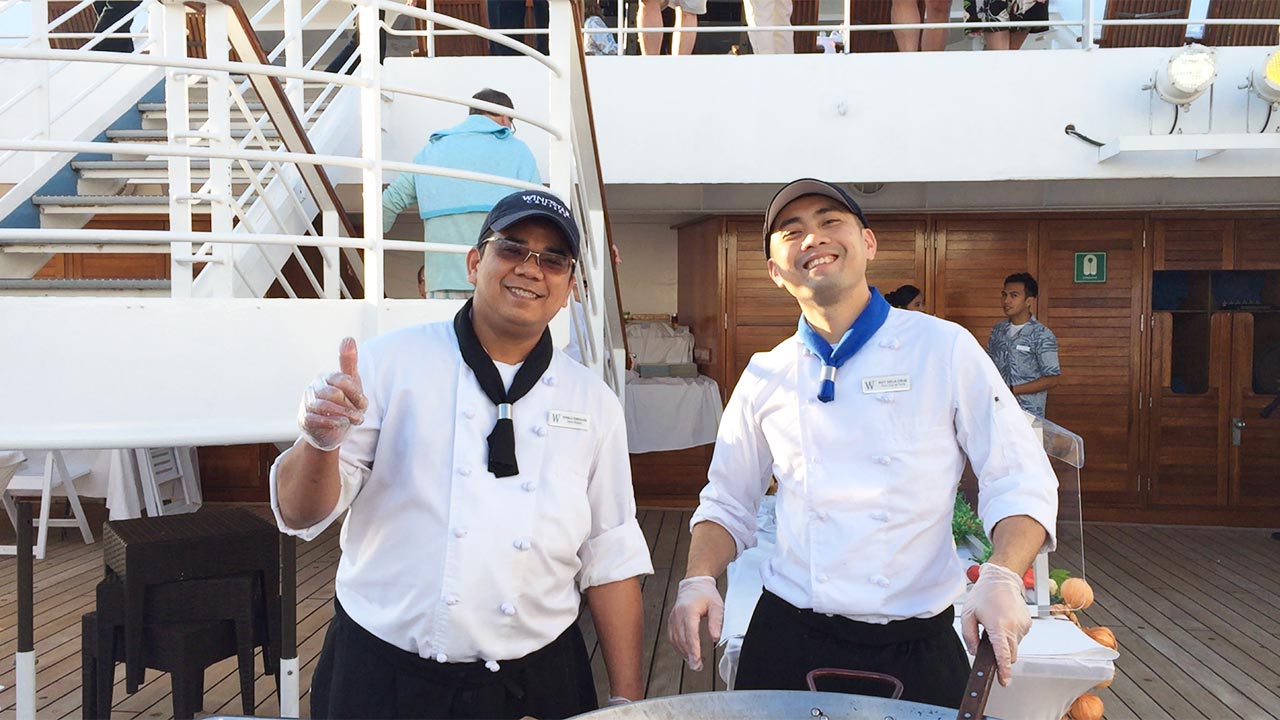 A Thumbs Up is good for us!  © About Luxury Cruising

The suites aboard Star Legend are a comfortable size at 277 square feet. Ours was 314 which had a delightful Julliet Balacony. The layout of the suite creates a very spacious feel and included a full seating area near our french balcony ocean view together with a couch on one side and two chairs and an end table on the other. In the center is a large, adjustble coffee table.

Windstar has made significant changes to suites onboard following the purchase of Star Legend from Seabourn. Attractive new colour co-ordinated fabrics, furniture and soft furnishings have been added. There were new headboards together with the addition of additional bedside lamps and reading lights. All the carpets have been upgraded, new furniture fitted and this made the suite feel really comfortable and relaxing.

On the bathroom front, this was a spacious, marble-clad bathroom complete with a tub-shower combo and a dual vanity sink. This was very much as we remebered it from our earlier days with Seabourn. There were shelves on either side of the vanity unit, with additional storage behind a mirrored glass panel located on the inside of the room opposite the sink and door. Toiletries are Windstar-standard: French-milled L’Occitane. Lovely.

Star Legend also has two 575-square foot Owner’s Suites and a handful of Classic Suites that range in size from 400 square feet to 530 square feet. 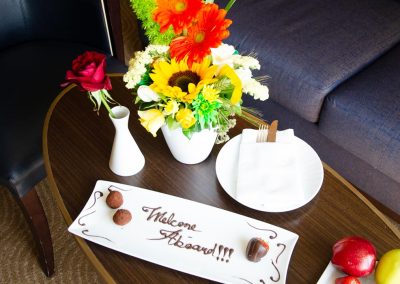 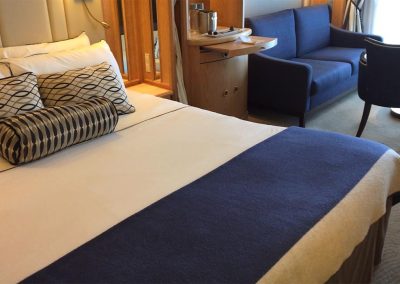 Our Suite On Star Legend 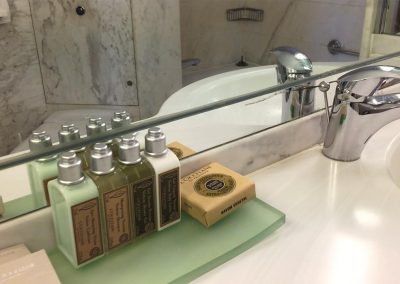 We found that there was never an issue finding somewhere to relax in your one of the many public areas on the Star Legend. The Central Atrium is one of the features of the ship and almost all the public spaces are situated aft of the atrium. The exception being the Yacht Club which is forward on Deck 8 with stunning views. Tucked away on deck 6 aft starboard side is a cozy and well-stocked library featuring books dvds. The windstar spa 7 forward features treatment rooms rather large fitness center smal but functional gift shop located adjacent to the atrium also screening room where lectures games yes movies are held show lounge 5 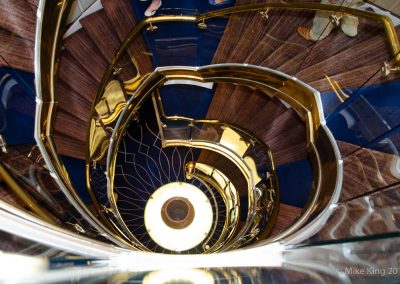 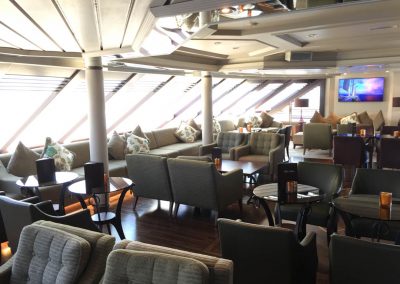 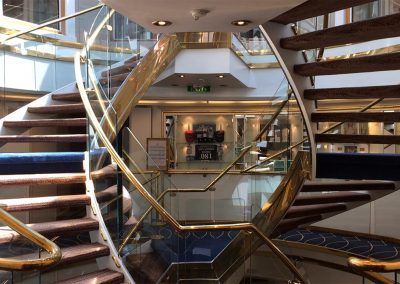 Our evening meals were normally typically taken in AmphorA, which is the main resturant aboard Star Legend. Situated on Deck 3, AmphorA has been tastfully upgraded and is no longer in the old Seabourn decor. It is now one of the most inviting public rooms aboard the ship. The seating options were goodand included intimate tables for two to larger ones that can seat six to eight guests. We generally sat at a table for 4 with friends.

Informal and casual meals and snacks meals were served in The Veranda on Deck 7 aft, with a buffet breakfast and buffet lunch being served here daily. The Veranda also offers a selection of a la carte menu dishes available for order from your waiter. In the evening, The Veranda turns into Candles Resturant which is an intimate, reservations-only dining venue. The atmosphere is intimate, with most guests dining outdoors on the stern of the ship, though indoor seating is also available. We loved the outdoor seating which makes you feel like you are on your own private yacht. Candles is a complimentary dining venue but booking is essentail. Continental breakfast, sandwiches, and other quick bites are available in the Yacht Club on Deck 8 forward, and canapes are served throughout the vessel, typically starting around 6 p.m. Room Service was also  available but we seldom use this.

There were a number of internet packages available but we were signed up for the unlimited package which worked well.

Windstar All In Package

On this cruise Windstar had arranged for us to enjoy their all inclusive package which they call the “All In” Package. This bundled package included the Captain’s Exclusive Beverage package, laundry and unlimted wifi. It is estimated that for two guests purchasing the “All-In Package” sharing a suite or stateroom, the total savings would  to $240 per guest or $480 total per couple, based on a 7-day cruise.

Setting sail on Windstar sailing ships and the act of setting sail on departure is “180 degrees from ordinary”. On Windstar, it’s a true event, accompanied by the raising of the sails to the Vangelis song from the film1492: Conquest of Paradise. The only issue is that Star Legend and her two sister “power yachts” have no sails.

Windstar thought of that, and solved the problem with a special flag raising ceremony that takes place on the forward radar mast just above the Star Bar on Deck 8. On our voyage one of the passgengers was invited to assist. To the tune of Conquest of Paradise playing over the ship’s sound system, we all gathered to watch this moving ceremony as two crew members appeared beside the forward mast, raising the Windstar Cruises house flag up to the crest of the musical score. It’s not as imprrssive as watching the sails billow out on Windstar’s sailing ships, but it’s nice to see Windstar made the effort to carry on that tradition aboard its Power Yachts.

Our experience on the Star Legend was one which we will treasure for many years.  The ship is full of character and the crew were simply amazing and we would not hesistate to sail on Windstar again. We loved the informal realxed atmosphere and compact size of the ship. We enjoy cruising on smaller ships as they offer more interesting itineraries and a more persnal service. 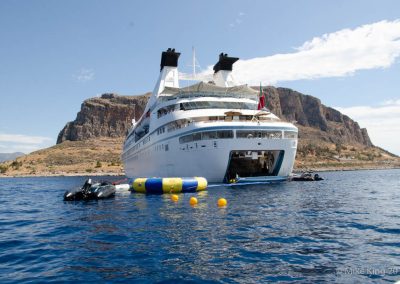 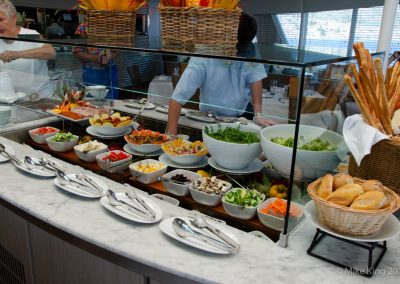 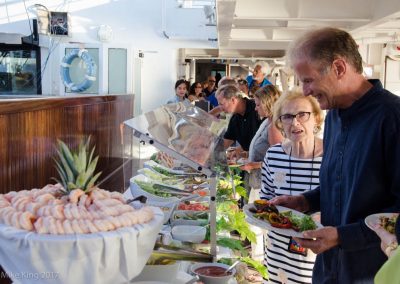 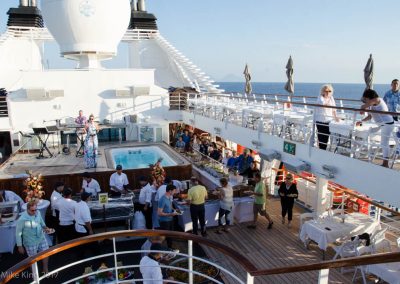 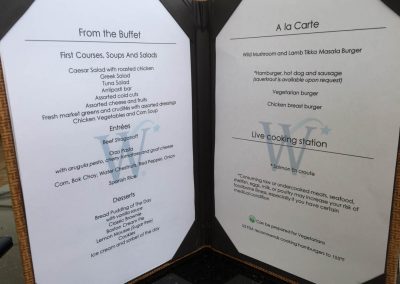 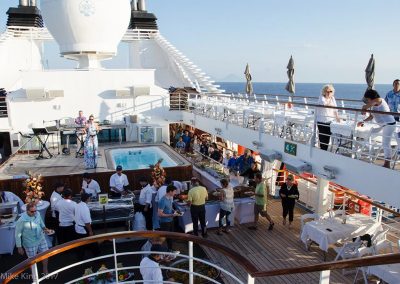 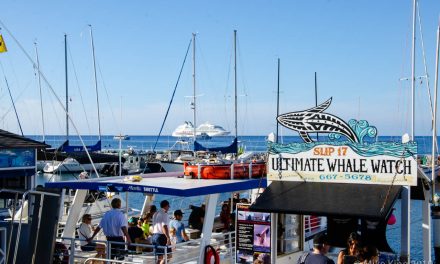 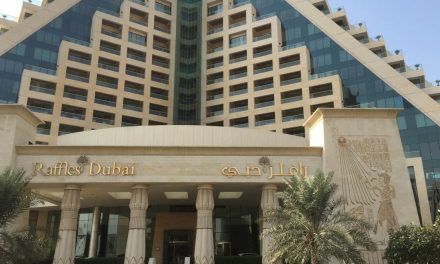 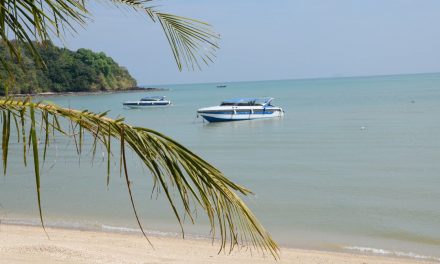