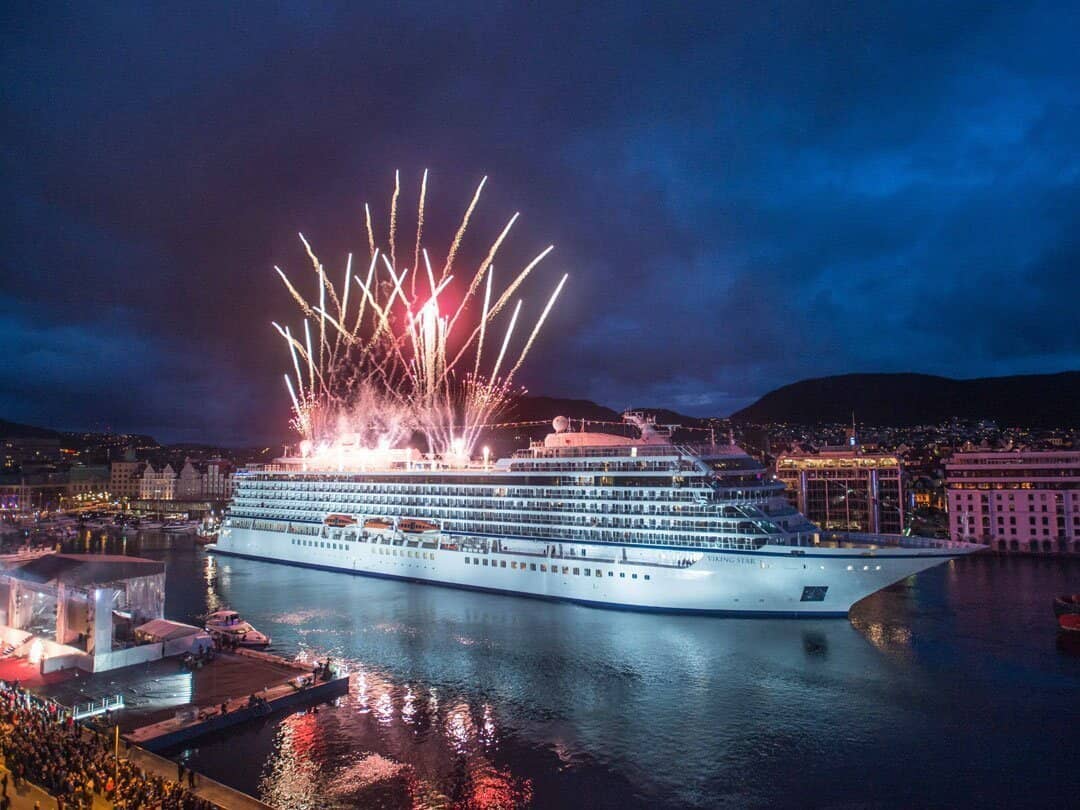 Marking a significant milestone in the arrival of the travel industry’s first entirely new cruise line in a decade, Viking Ocean Cruises® (www.vikingoceancruises.com) yesterday christened its first ship, the 930-passenger Viking Star. The ceremony – which took place in Bergen, Norway – occurred in conjunction with a citywide celebration for Norwegian Constitution Day and featured parades, parties and a public concert in the harbor that was attended by approximately 20,000 local residents and visitors. In addition to the public fanfare, Viking Star’s arrival in Bergen is noteworthy because it marks the first time in 10 years that a Norwegian-flagged passenger cruise ship has chosen Norway’s second-largest city as its homeport. Furthermore, the mayor of Bergen, Trude Drevland, served as ceremonial godmother and offered a blessing of good fortune and safe sailing for Viking Star – a naval tradition that dates back thousands of years.

“We believe the arrival of Viking Star signals a new era in destination-focused cruising, and I could not be more proud that she will call my favorite city in the world ‘home,’” said Torstein Hagen, Chairman of Viking Cruises. “This is a ship that was built for exploration and designed with our Scandinavian heritage in mind, and our guests will experience it from the moment they step onboard.”

Viking Star’s christening was the culmination of a maiden voyage that began April 11 when the ship set sail from Istanbul. Over the last five weeks, she made stops in what will be regular ports across the Mediterranean and Western Europe, including Athens, Santorini, Kotor, Dubrovnik, Venice, Barcelona, Seville (Cadiz), Gibraltar, Lisbon, Paris (Rouen) and London. Yesterday in Bergen, Viking Star was positioned in the harbor to serve as the backdrop for a first-of-its kind floating concert.

As thousands of attendees gathered along the waterfront last night, they were treated to performances by world-renowned artists and musicians – all of whom have a personal connection to Bergen – including Norwegian soprano Sissel, actor Bjarte Hjelmeland, singer-songwriter Sondre Lerche, acclaimed violinist Charlie Siem and comedy duo Ylvis. Following the concert, christening ceremony, and a fireworks show, Viking Star set sail on a special journey to Oslo and from there will continue on to Copenhagen, Berlin, St. Petersburg, Tallinn, Helsinki and Stockholm.

Destination Cruising with Viking Star Classified by Cruise Critic as a “small ship,” Viking Star has a gross tonnage of 47,800 tons and accommodates 930 passengers in 465 staterooms – each with its own veranda. Engineered at a scale that allows direct access into most ports, guests have an easy and efficient embarkation and disembarkation, allowing them more time to spend enjoying each destination. With early reviews already in, Carolyn Spencer Brown of Cruise Critic has called Viking Star a “game changer,” and Gene Sloan of USA Today proclaimed “you’re going to love Viking Star.” Light-filled with modern Scandinavian décor, Viking Star was designed by experienced nautical architects and engineers, including the same interior design team responsible for the award-winning fleet of Viking Longships®. Throughout the ship, details were incorporated to pay homage to Nordic heritage and to help guests immerse themselves in local surroundings. A glass-backed infinity pool off the stern offers unobstructed views; indoor-outdoor spaces offer more options for al fresco dining than any other vessel in its class; huge windows and skylights blur the lines between inside and out; and a wrap-around promenade deck nods to a bygone era of classic ocean liners.

Onboard Viking Star, clean lines, woven textiles and light wood evoke the Viking spirit of discovery and connection to the natural world. A carefully curated collection of Norwegian artwork adorns the walls of the restaurants and public spaces. In the two-deck Explorers’ Lounge at the bow of the ship, the décor was inspired by ancient Viking trade routes and navigation methods – imagery of star constellations and astronomical maps are complemented by antique globes, astrolabes and sofas with cozy pelts. In the Spa, the holistic wellness philosophy of Scandinavia is in mind – from the Nordic ritual of the hydrotherapy pool and the first Snow Room at sea, to materials inspired by Scandinavian nature: Swedish limestone and black slate; juniper and teak wood details; recycled and etched opaque glass; and cast iron. In the Wintergarden, blonde wood “trees” stretch their branches up to the glass ceiling, forming a lattice canopy over a serene space where guests can enjoy afternoon tea service. And in the Viking Living Room, a geometric garden was inspired by the wild lichen of Norway’s Finse Mountain Plateau. Viking Ocean Cruises guests enjoy curated itineraries that are designed to best showcase the destinations that they visit, with a complimentary excursion in each port and an onboard cultural enrichment program that includes academic lecturers, local speakers and interactive demonstrations. Viking Star is one of three ocean cruise ships on order; two additional ships,

Viking Sea and Viking Sky, are currently under construction.