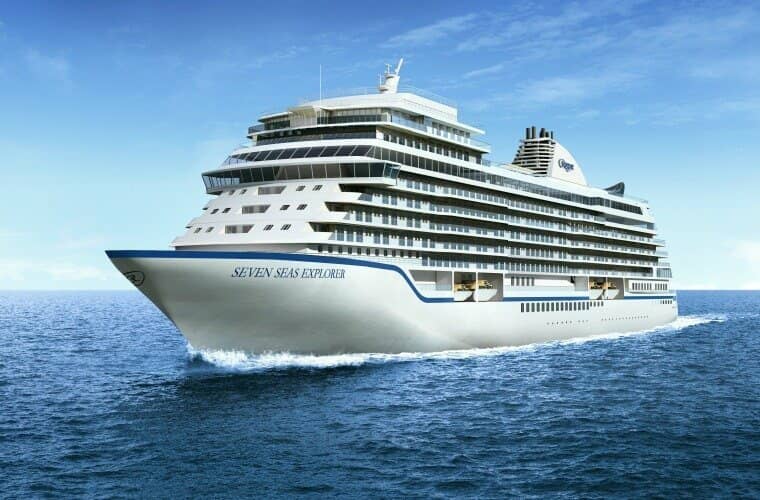 Construction has begun on the new Regent Seven Seas Explorer at the Fincantieri shipyard in Genoa, Italy. The crisp pop of a cork being freed from a Krug Grande Cuvée magnum initiated a laser, which cut the ceremonial first piece of steel for the new ship. Incorporating a bottle of the world’s finest champagne to start the building process is symbolic of the high level of sophistication and design being developed for Seven Seas Explorer, which is scheduled to debut in summer 2016.

The ceremonial first piece of steel cut this morning will serve as the foundation for an opulent, one-of-a-kind owner’s suite unlike any other at sea. The suite, resplendent with exquisite stonework and luscious fabrics, will serve as a hallmark for the superior level of elegance found throughout the ship. When it debuts, Seven Seas Explorer will establish a new benchmark for style and service and perfectly complement the all-inclusive luxury experience currently enjoyed by guests sailing with Regent Seven Seas Cruises.

During the ceremony, Kunal S. Kamlani, president of Regent Seven Seas Cruises, and Gabriele Cocco, senior executive vice president of merchant ships for Fincantieri, began a countdown that culminated with Maison Krug Italy’s master sommelier, Michela Cimatoribus, releasing the cork from a magnum of Krug Grande Cuvée. As the cork soared and the champagne flowed, confetti cascaded down and the laser cut the first piece of steel for the 750-passenger ship.

“We’re one step closer to fulfilling our dream of building the most luxurious ship in the world and giving our guests another exciting option to explore inspired global destinations with our special brand of all-inclusive luxury,” noted Kamlani. “Seven Seas Explorer will surpass the current standard in luxury cruising, offering a new level of grandeur throughout the ship from its lavish suites to its elegant public spaces and gourmet restaurants.”

“We are extremely excited to welcome a new partner in Regent Seven Seas Cruises and to start construction of this brilliant new ship,” commented Giuseppe Bono, CEO of Fincantieri. “As a global leader in cruise ship construction, we’ve built some of the finest ships at sea. Building the most luxurious ship ever built is quite a challenge, but with our craftsmanship and experience building luxury ships we feel that Seven Seas Explorer will become the definition of excellence.”

Regent Seven Seas Cruises is expected to start taking reservations for the maiden voyage and inaugural season for Seven Seas Explorer in early 2015.