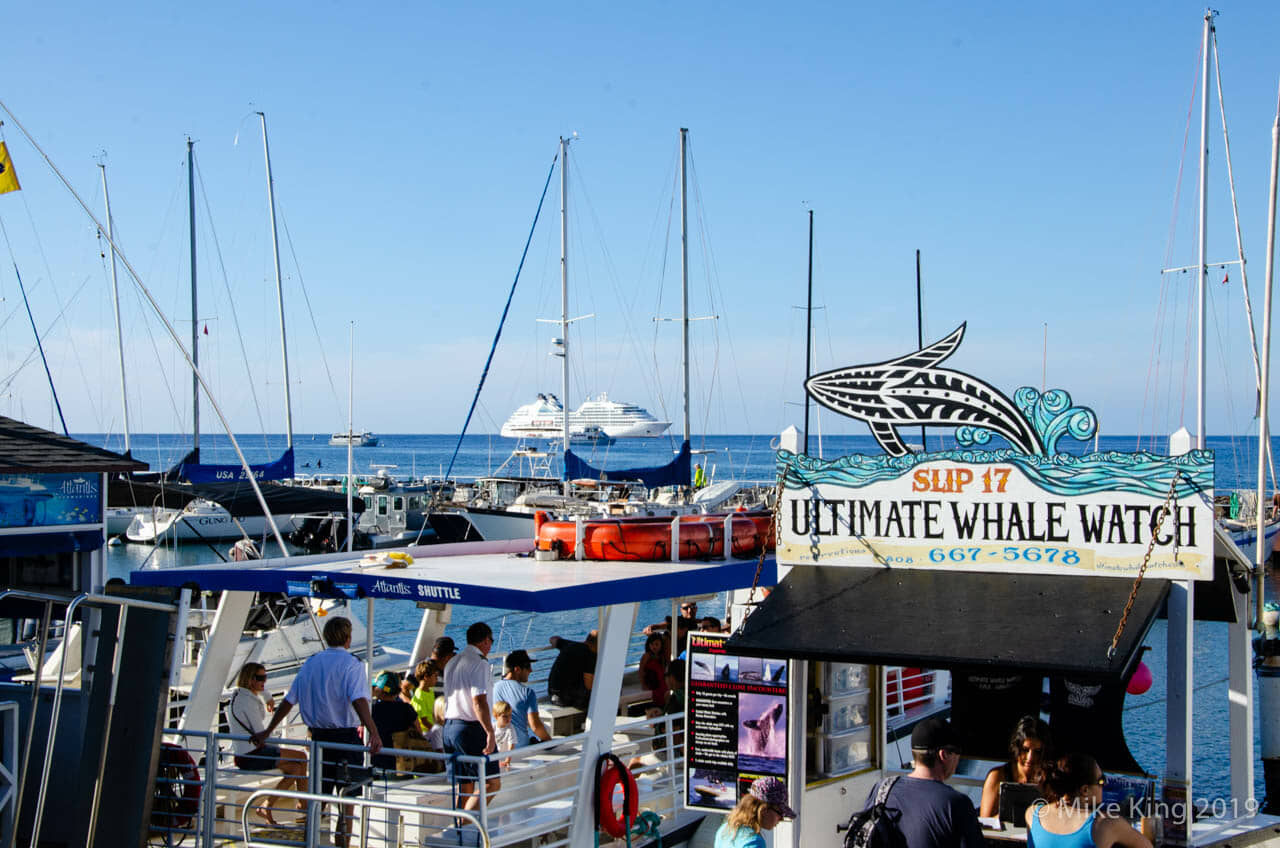 Hawaii is probably on quite a few bucket lists of travel destinations.  It was certainly on ours, but living in the UK, Hawaii is not the easiest place in the world to get to.  The flight to LA takes 13 hours or so and then you have another 5 hours to Hawaii.  With so many travel packages to Hawaii to choose from we actually chose to see Hawaii on a Luxury Cruise with Seabourn.

Sailing on the Seabourn Sojourn from LA was magical as the departure port was actually Long Beach, California where the original Queen Mary is located as a tourist attraction. The cruise terminal is right next to the once graceful Cunard Queen Mary.

The voyage from LA to Hawaii was really uneventful and to everyone’s surprise, the seas were flat calm which is apparently not the norm.

Our first port of call was Hilo on the Big Island of Hawaii, or Hawaii Island, famous for its Volcanoes and  Kona Coffee. This is an island made for exploration. A place of stark contrasts – from black sand beaches to rugged volcanic coastlines, it is the biggest of the Hawaiian islands 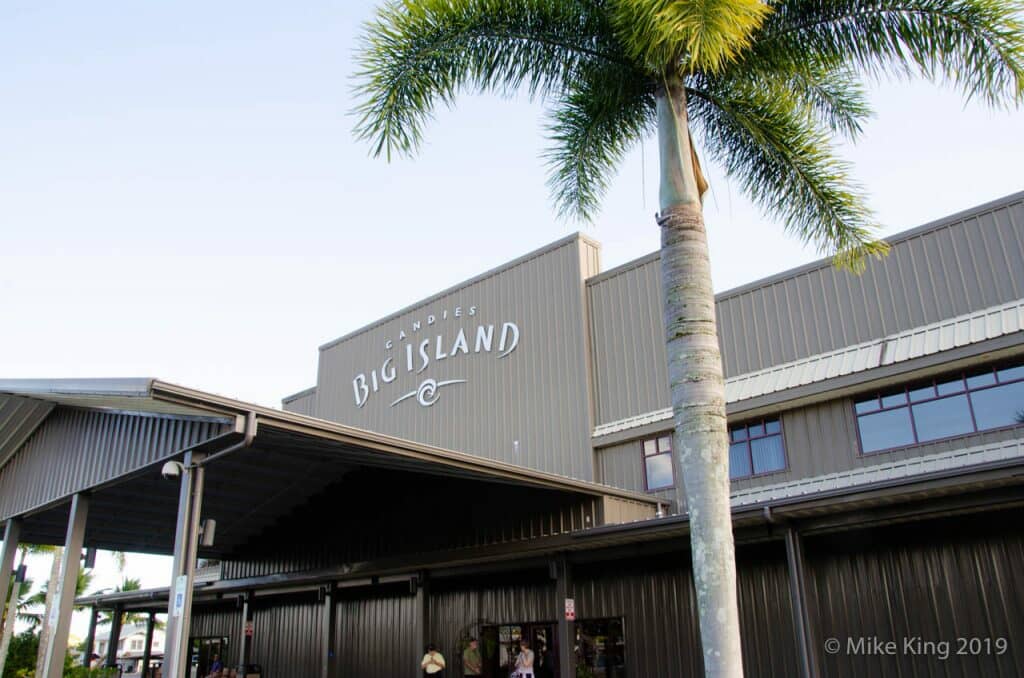 First impressions of Hilo, Hawaii is that we could be arriving at any port in Europe judging by the scenery but we were in good shape and decided on the Seabourn shore excursion entitled “Gourmet Volcanic Adventure” as we wanted to see the Kilauea volcano which has been erupting since 1983. Amazingly about 500,000 cubic yards of lava is spewed out by the Kilauea every day. Good trip but not sure where the “gourmet” element featured in the tour.  Lunch I suppose. 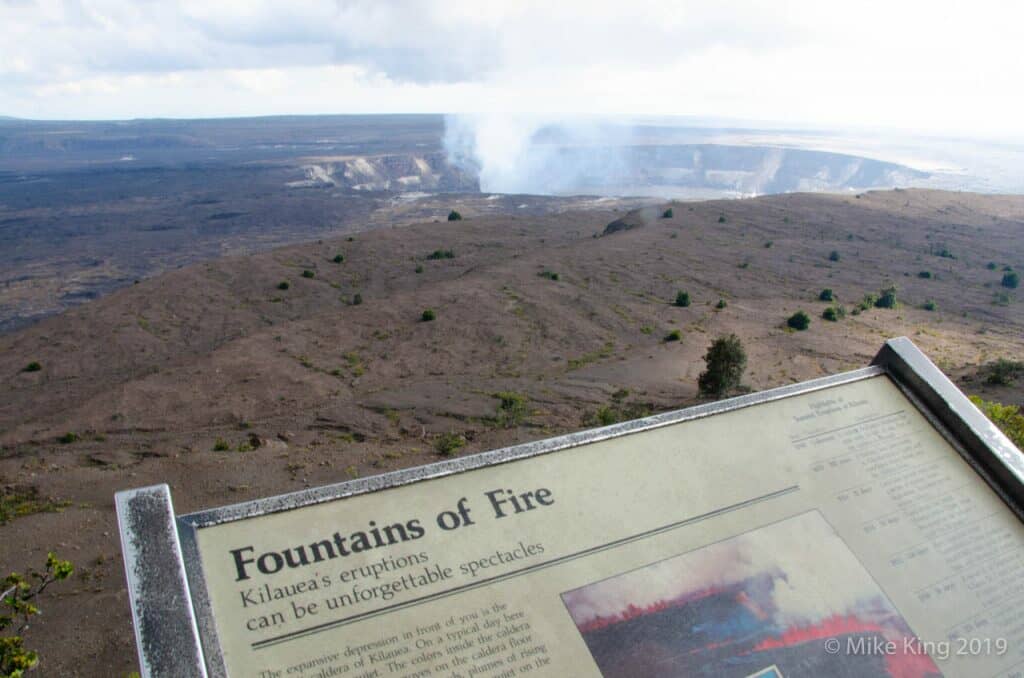 We had to tender in to the shore and the good news was the sea was reasonably calm. The Seabourn Team make the Tendering process look easy.  The great thing is that as the Seabourn ships are small in passenger numbers, tendering is not the “challenge” that it can be on some of the bigger ships. Once over on land we had a quick browse round the shops whilst waiting for our tour to start.  Our tour entitled “Tour of Panoramic Maui and Iao Valley State Park” was not too long – we favour half day trips. 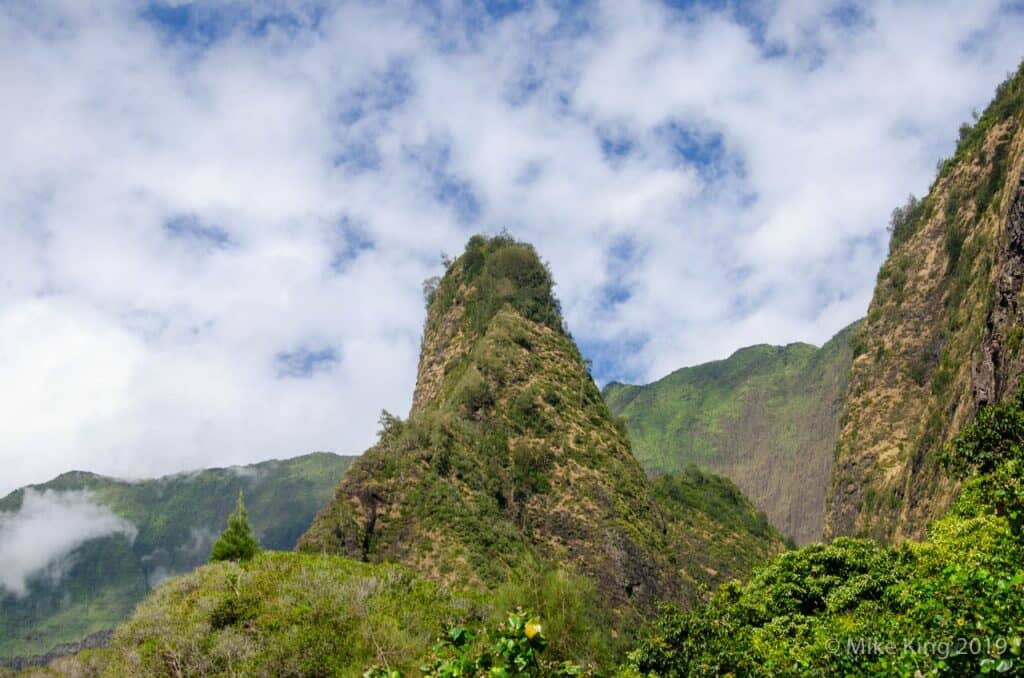 The State Park is a trip well worth taking as it gives a less commercialised view of the Island. 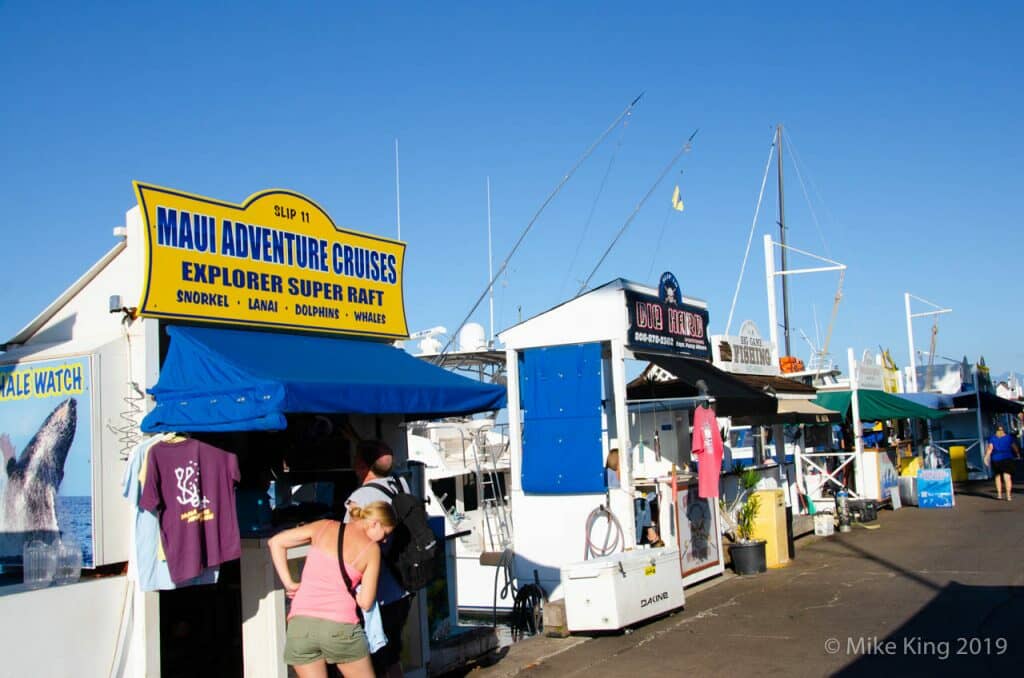 The waterfront in Lahaina , Maui, Hawaii

Lahaina is a wonderful place where everything is so picturesque and colourful.  The sun probably has a lot to do with this and it just makes you feel good! All in all a great trip to the island of Maui; admittedly only a taster but we were not disappointed.  Then back to the comfort of our ship to dine once again with good friends and enjoy the sail away from Maui. 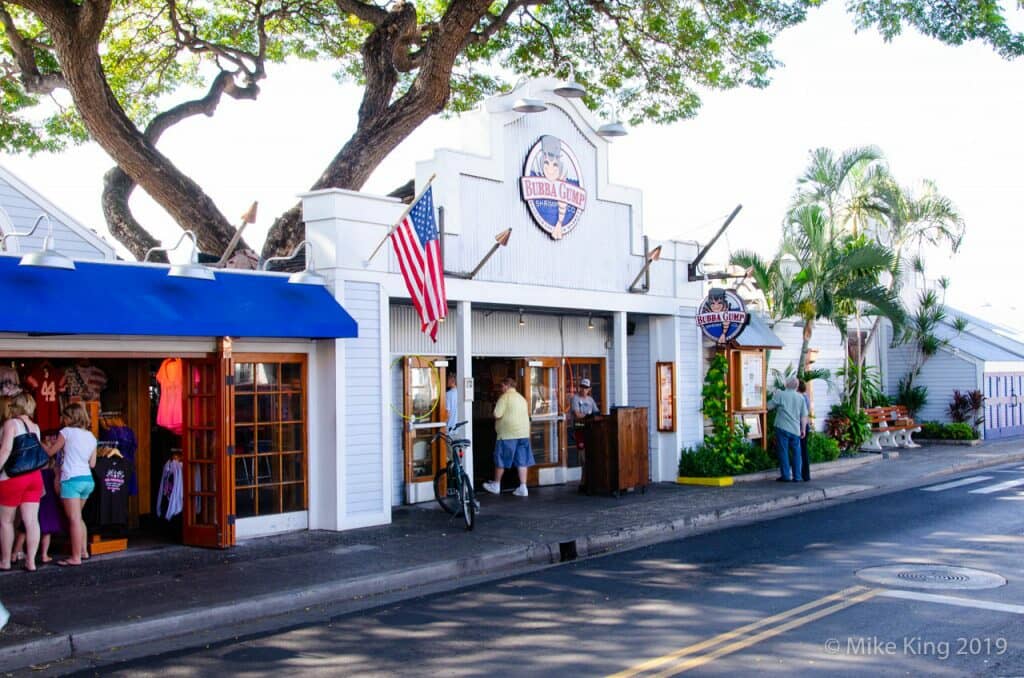 The anticipation of visiting the island of Oahu and the city of Honolulu and Pearl Harbour was immense.  This was absolutely the one place we wanted to experience, despite many folks suggesting it was just too commercialised.  To be honest in places it is, it can be crowded and the traffic is bad, but there is a friendly buzz about the place. Everyone seems so enthusiastic that you just put this aside. We were here for 2 days and wanted to make the most of our time on this paradise island. 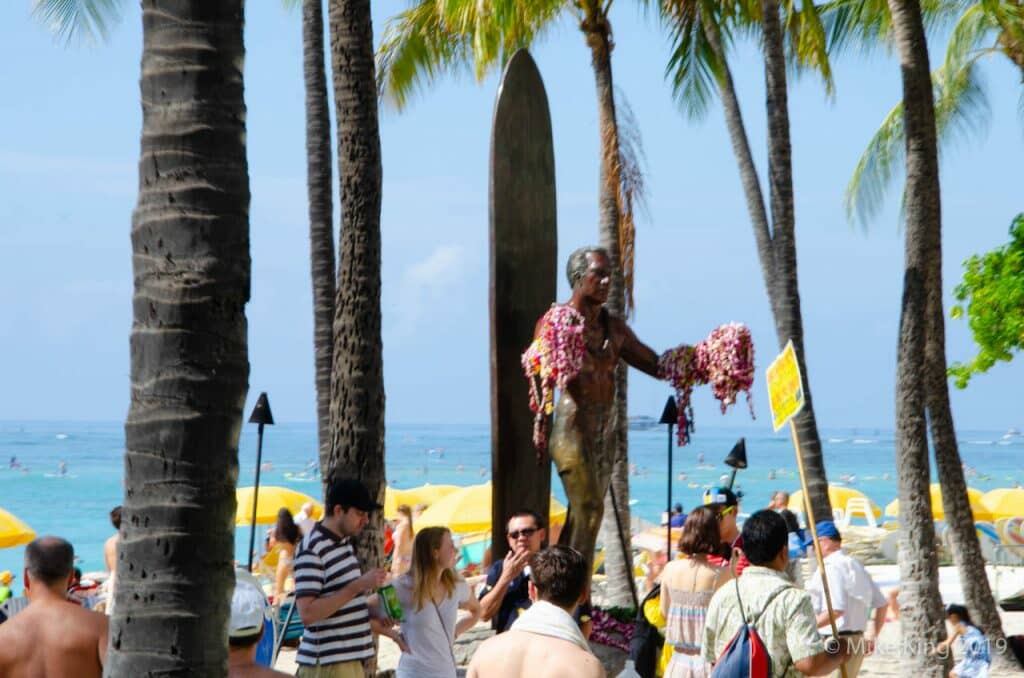 First stop Waikiki Beach.  Had the mandatory Hawaiian cocktail on the beach and just savoured the atmosphere.  Loved it. 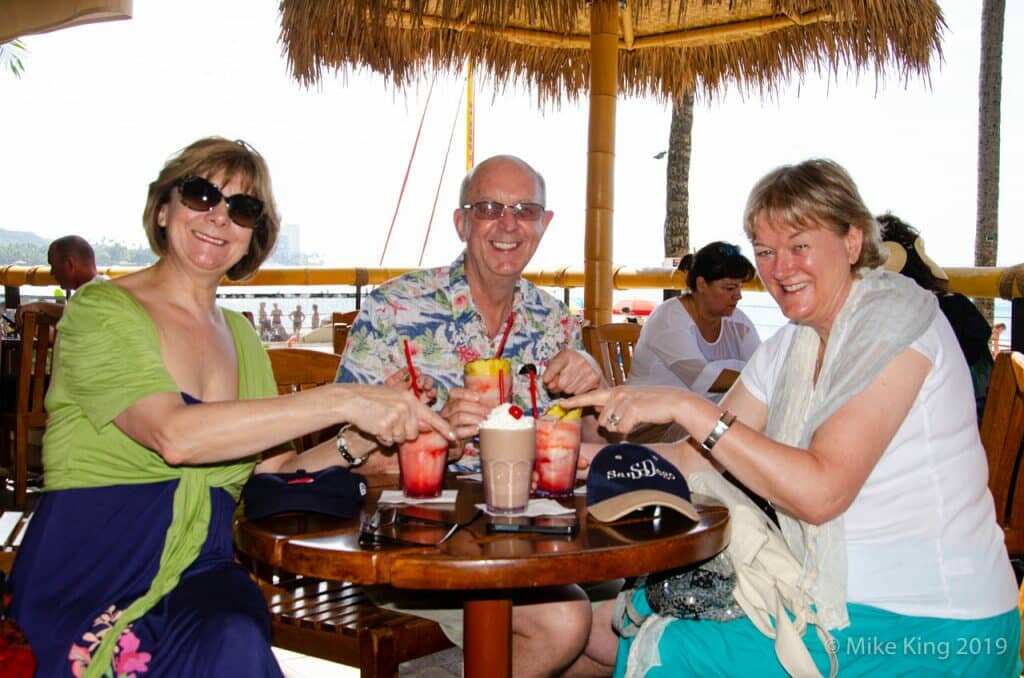 Back to the ship for a gorgeous Seabourn lunch. They really know how to look after you!   Pool deck as it was warm. 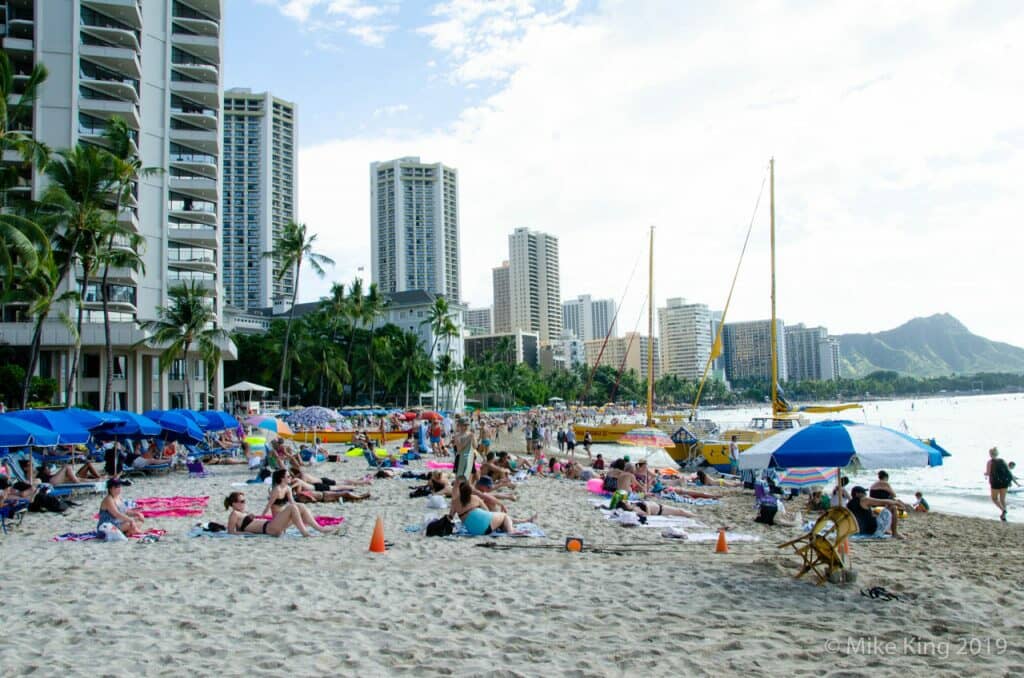 On our second day we took Seabourn’s Pearl Harbour VIP tour, when we visited the USS Arizona Memorial site which commemorates the sailors who lost their lives in the Ship on 7th December 1941. Very moving experience and unbelievable how the Japanese were able to mount such a surprise attack. seeing the names of all the US soldiers who died that day and the wrecked Arizona battleship still submerged underwater was a somber experience. 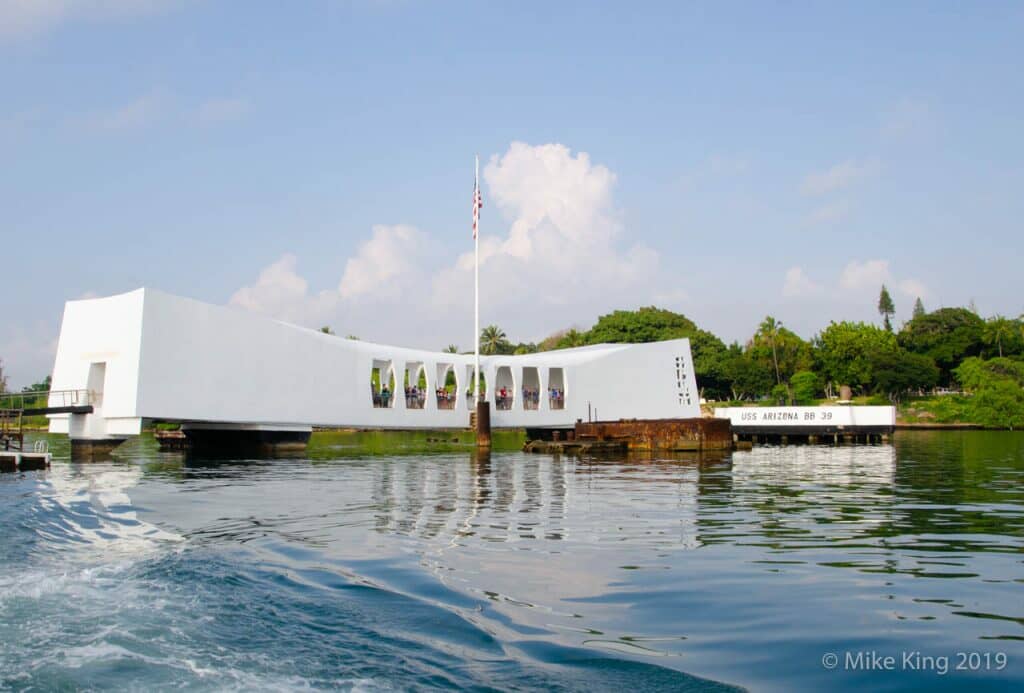 We learned how the Japanese attack was not just confined to Pearl Harbour.  We visited Wheeler Army Airfield, where Japanese planes first attacked to prevent any air opposition from US forces.  We drove by the Schofield Army Barracks – the largest American Army base outside the Continental U.S. It was a rare sight into the military day to day life and whilst at the Headquarters the Commander in Chief of the Military (Pacific) and Chief of Staff arrived for a big meeting and spoke to us all before entering the building.  How honoured were we. 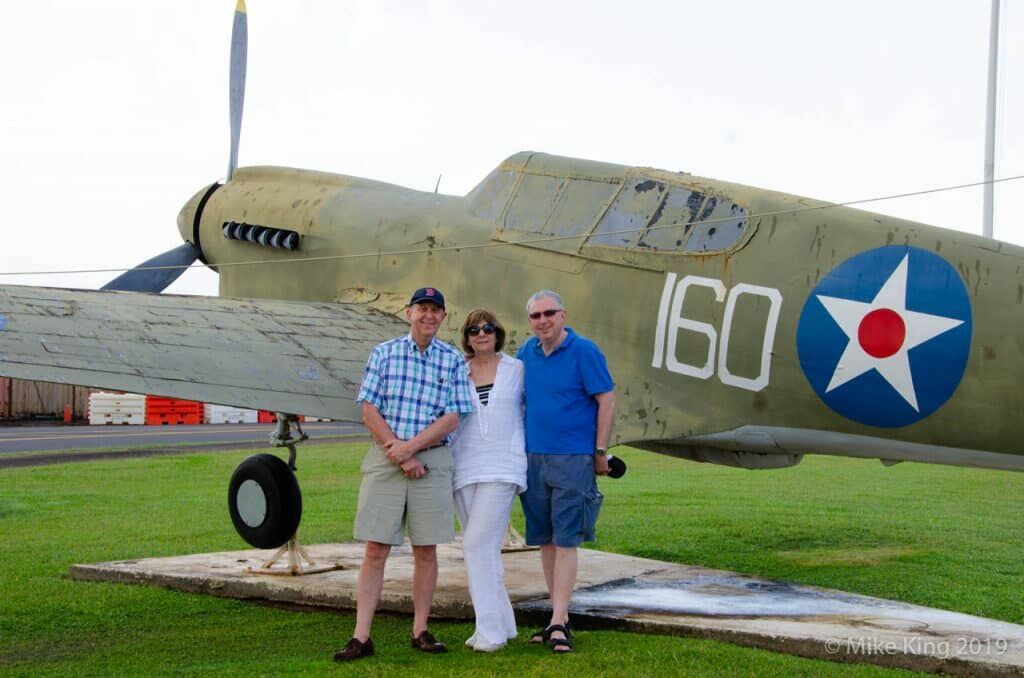 That evening Seabourn put on a special “Signature Event” for those on this leg of the World Cruise. The setting was on the Battleship USS Missouri which is where the document of the Japanese surrender after the second World War was signed.  This event was simply stunning and organised in a way that only Seabourn know how.  Drinks flowed, Canapés were plentiful and there was even 1940 style entertainment.  A truly memorable experience. 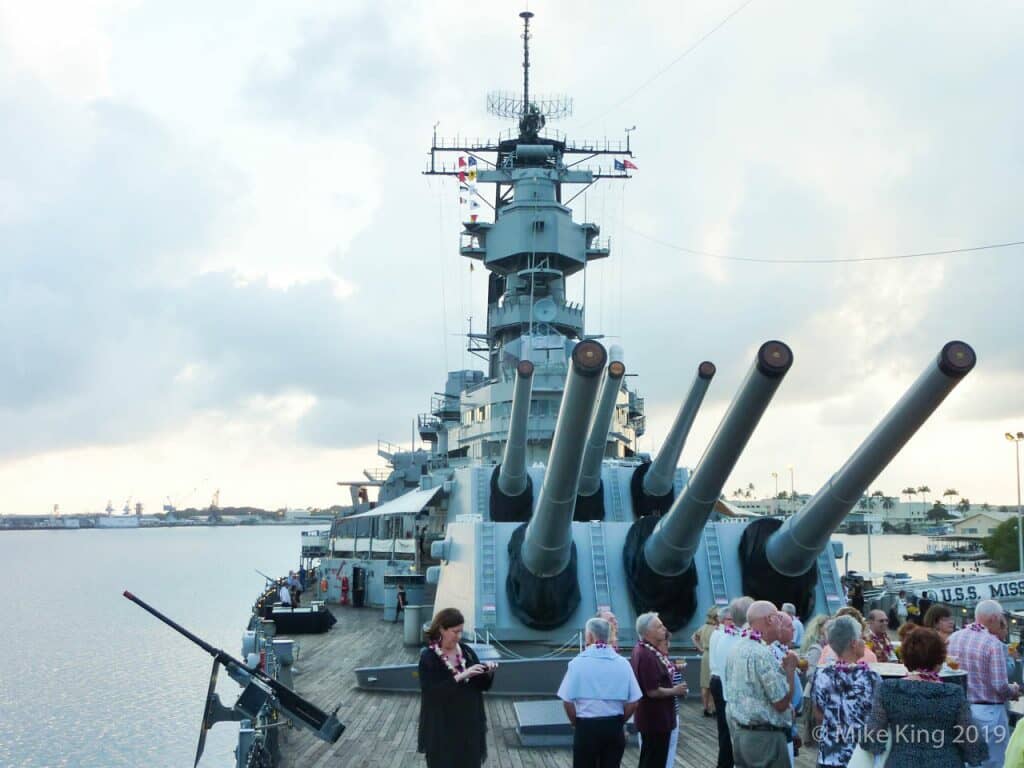 At the end of our short stay on the island of Oahu, we had fallen in love with everything we had seen.  There is much more to discover and hopefully we will be back one day.

Kauai, is the oldest island of the Hawaiian Islands, and supposedly a place where worries vanish in the trade winds, warm saltwater laps the golden sands of Kauai’s Beaches and the rain-forests of Koke’e host earth’s rarest plants and birds. Kauai has kept herself charmed, mysterious and unconquered. Known as The Garden Island and you can see why. Very lush and green. We took the Waymau Canyon and Spouting Horn trip. Drove to the canyon but heavy torrential rain meant that we could not get out of the coach nor could we see anything as it was shrouded in cloud. Shame as it is renowned for it’s fabulous views. The Sprouting Horn was a bit of a disappointment. 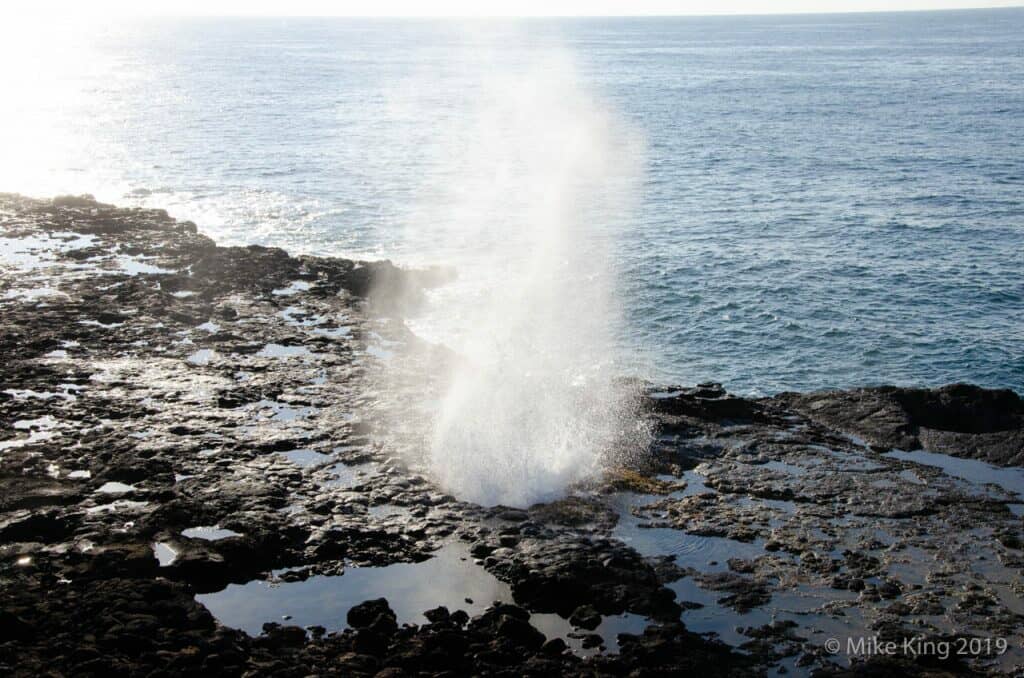 Nawaliwali.  There was a beach and several shops nearby so it made a pleasant stroll out.  Just managed to get back to the ship before the heavens opened. 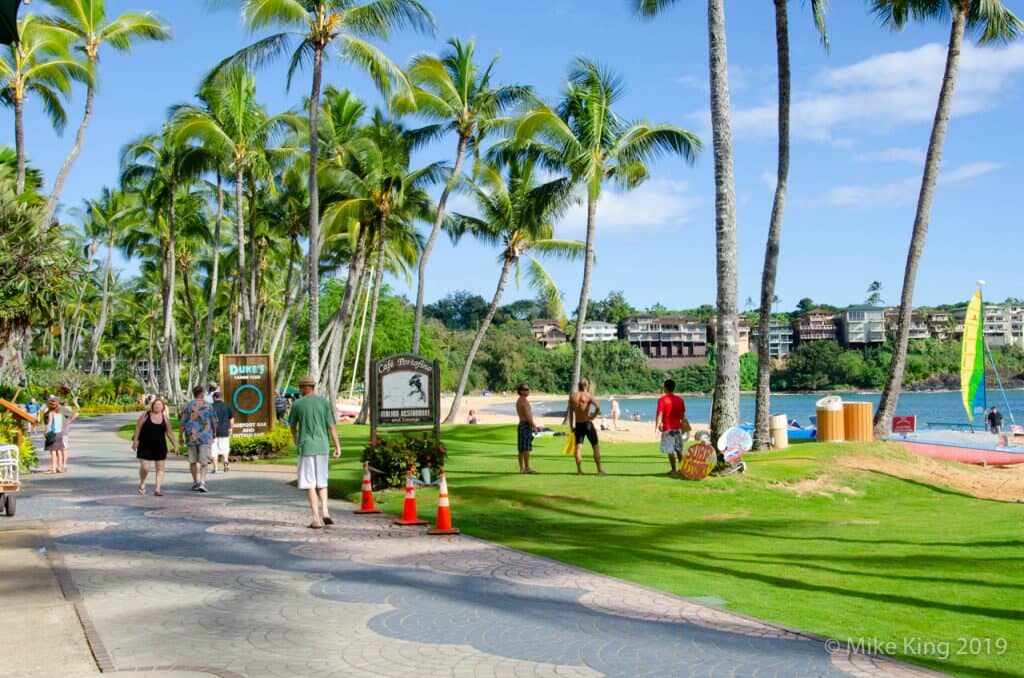 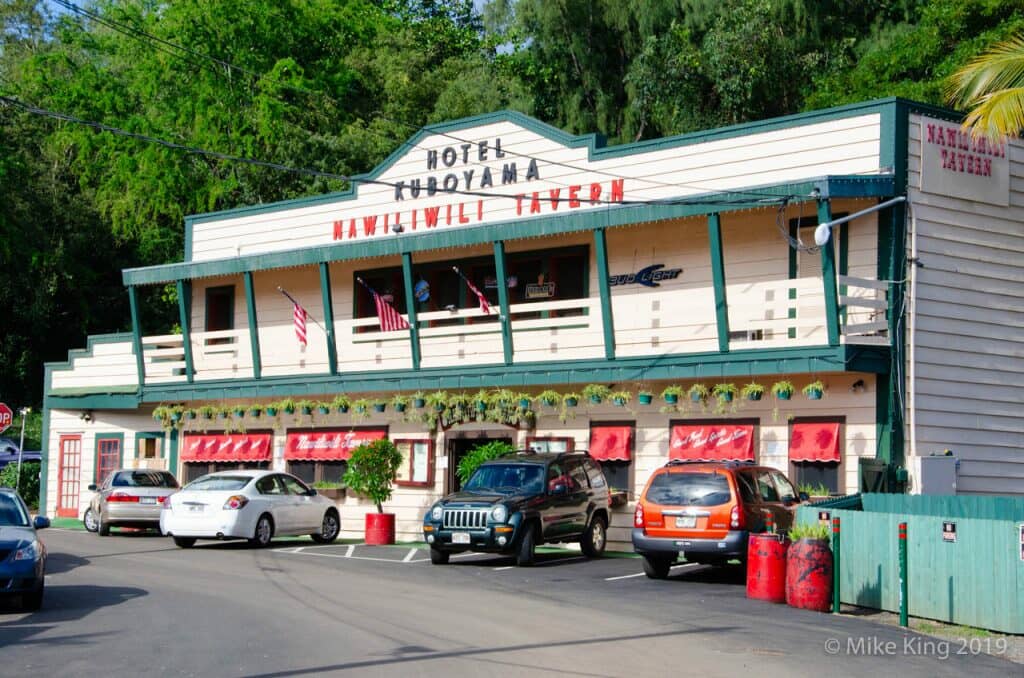 So, with our few days in Hawaii, we managed to see a lot of interesting sights and learn so much about the islands.  A great experience where Seabourn did us proud.  After all the activity of the last few days we can no look forward to another 5 days at sea before we arrive in French Polynesia.