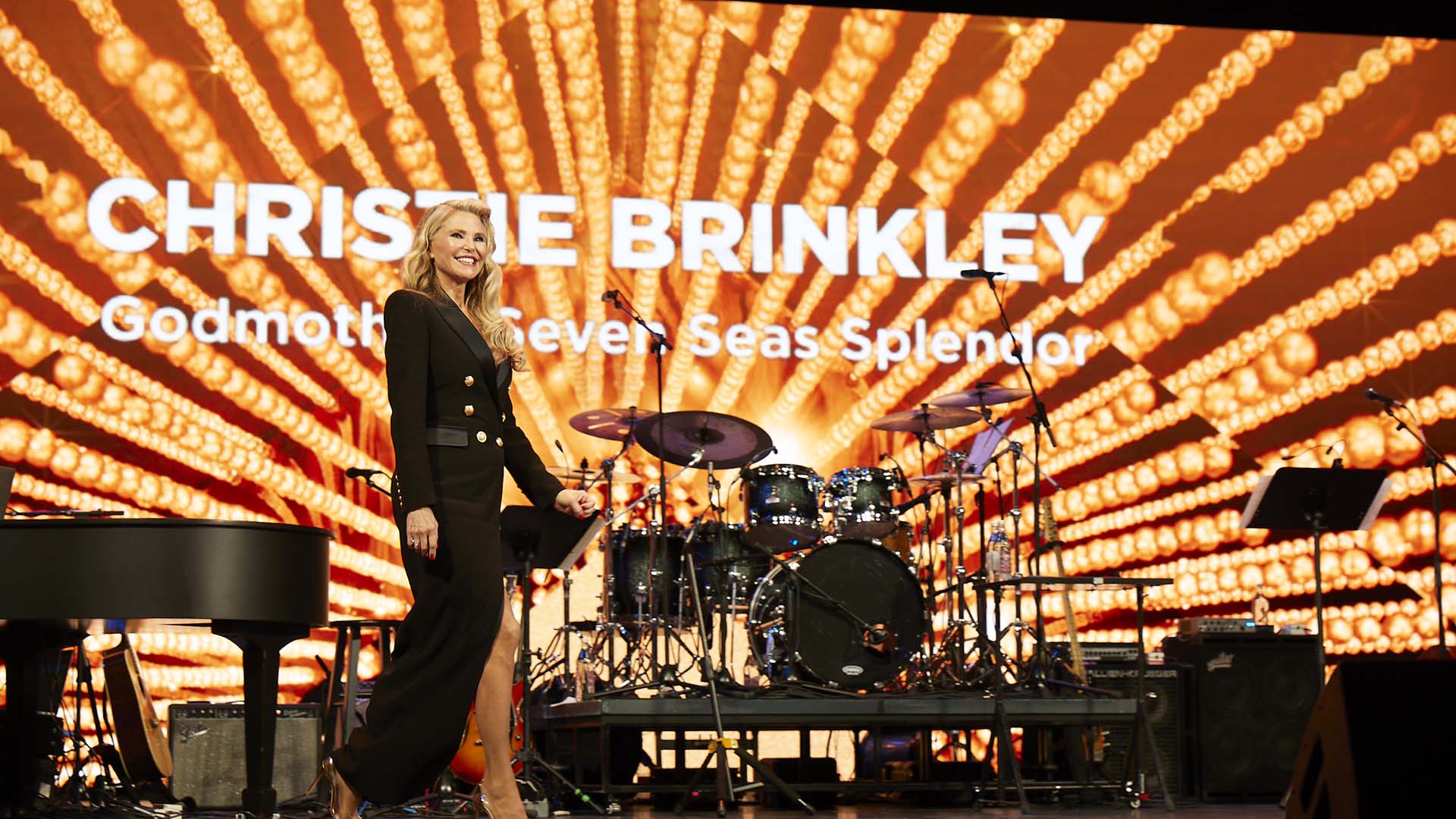 “Regent Seven Seas Splendor is the epitome of luxury perfected,” said Frank Del Rio, president and chief executive officer of Norwegian Cruise Line Holdings Ltd. “Every ship we launch gets even better, and Seven Seas Splendor is magnificent. The collaboration between the designers, engineers, craftsmen, hotel and restaurant teams, and the crew onboard, all brings the renowned Regent experience to life on this beautiful ship. Seven Seas Splendor is a celebration of excellence, friendship, success and luxury.”

Regent Seven Seas Splendor is helmed by 30-year veteran Captain Serena Melani, the first woman to captain a newly built ocean cruise ship. In acknowledging this pioneering honour during her remarks, Captain Melani told the audience following a standing ovation that women can achieve any goal with perseverance and hard work, and that the ship’s 550 crew members deserve recognition for providing luxury travellers with the highest levels of personalised service and comfort on board. 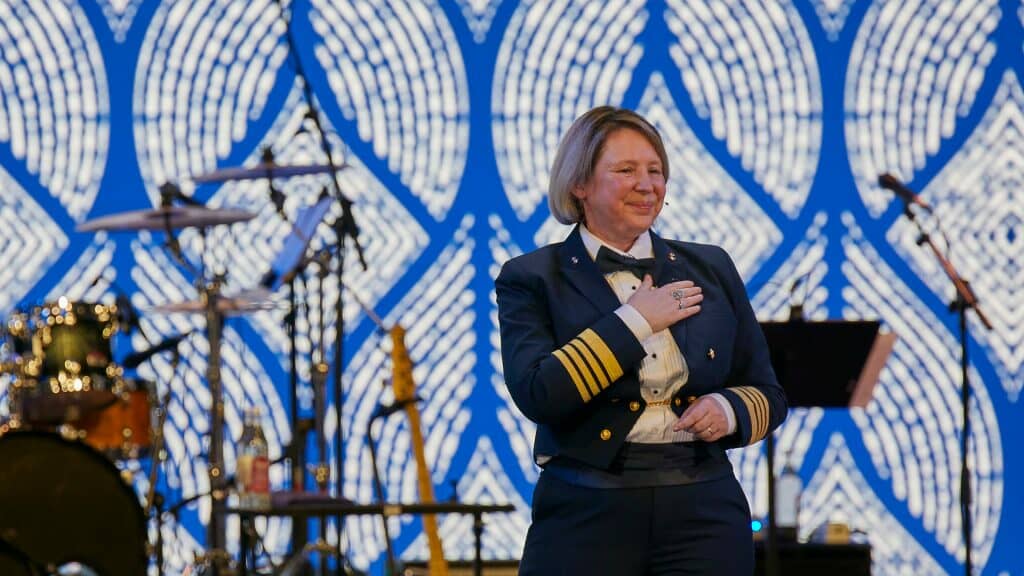 Another woman trailblazer followed Captain Melani on stage. Honorary Godmother Christie Brinkley delivered the traditional maritime blessing –“I hereby name this ship Seven Seas Splendor. May God bless her and all who sail on her” — which officially christened the vessel. The world-famous supermodel, glamorous actress, proud mother and successful entrepreneur then depressed a button which sent a 15-litre Veuve Clicquot Yellow Label Brut champagne smashing against the ship’s hull to symbolically welcome the newest member of the Regent Seven Seas Cruises fleet.

“Gorgeous is the word I use to describe Seven Seas Splendor,” Brinkley said. “All the details on this ship are amazing, from the artistic style of the Italian marble, the artwork and chandeliers, to the sculpture of the mythical dragon outside Pacific Rim. Every inch of this light and bright ship is filled with luxurious details. My parents had cruised on Regent ships. If they were here today, they would be so excited and proud for me to be Godmother to Seven Seas Splendor.”

To conclude the celebration, guests were treated to an unforgettable concert by four-time GRAMMY-award winning British singer-songwriter, Seal, whose performance wowed the audience. Seal’s multi-genre set featured his hit songs “Kiss From A Rose” and “Crazy,” as well as classics from his most recent 2017 album Standards, which was inspired by his love of Rat Pack-era jazz, swing, and rhythm and blues. He performed several Frank Sinatra signature songs, including “Luck Be A Lady,” “That’s Life” and “It Was a Very Good Year,” as well as Ben E. King’s “Stand By Me” and the classic R&B song, “I Put a Spell on You.”

“Seven Seas Splendor reflects the extraordinary length to which Regent Seven Seas Cruises delivers An Unrivalled Experience for guests across our fleet, with every luxury included,” said Jason Montague, the cruise line’s president and chief executive officer. “Guests marvel at her impeccable design, luxurious suites, exquisite cuisine, immersive experiences at hundreds of ports-of-call, dynamic entertainment and outstanding, personalised service. She is a work of art, from bow to stern.”

Intimate and spacious, Regent Seven Seas Splendor offers her 750 guests the most luxurious accommodations as she sails to the world’s iconic destinations and less-familiar hidden gems.

The ship features more than 46,000 square feet of Italian marble and a $5 million curated fine art collection that is the most discerningly curated collection of museum-quality 20th– and 21st-century art on the seas. Her 375 suites include nearly 52,000 square-feet of balcony space – among the largest cruise ship balconies in the world. The beautifully appointed suites ranging from the 307 square-foot Veranda Suite to the lavish 4,443 square-foot Regent Suite.

The Regent Suite sets the tone for Seven Seas Splendor’s 14 other astonishing suite categories in offering the most luxurious accommodations at sea. Its guests enjoy the ultimate comfort of a $200,000 Hästens Vividus custom handmade mattress, an in-suite spa retreat featuring a personal sauna, steam room and treatment area with unlimited spa treatments, unobstructed 270-degree views over Seven Seas Splendor’s bow from the 1,300 square-foot wraparound veranda, and a glass-enclosed solarium sitting area on top of the bridge for a Captain’s view to see the world’s most beautiful destinations.

Guests in the Regent Suite also delight in business-class air accommodations, a dedicated personal butler to manage all the details of the guests’ experience, and a personal car with driver and guide in every port. 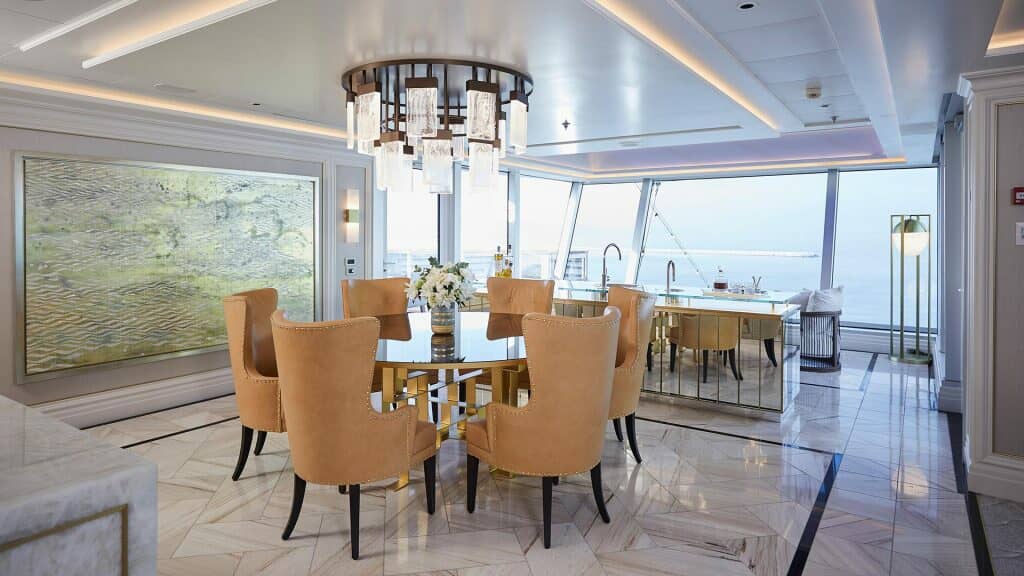 The ship’s exquisite restaurants include Compass Rose, the largest speciality restaurant at sea; Pacific Rim, a dramatic Pan-Asian restaurant with a mythical dragon greeting guests; Prime 7, an intimate and elegant steakhouse; Chartreuse, featuring classic French fare with a modern twist; and Sette Mari at La Veranda, serving guests authentic Italian specialities and featuring stunning, over-water alcove seating that juts out over the ocean for an even closer connection to the sea, surrounded on three sides by inspiring, magnificent views.