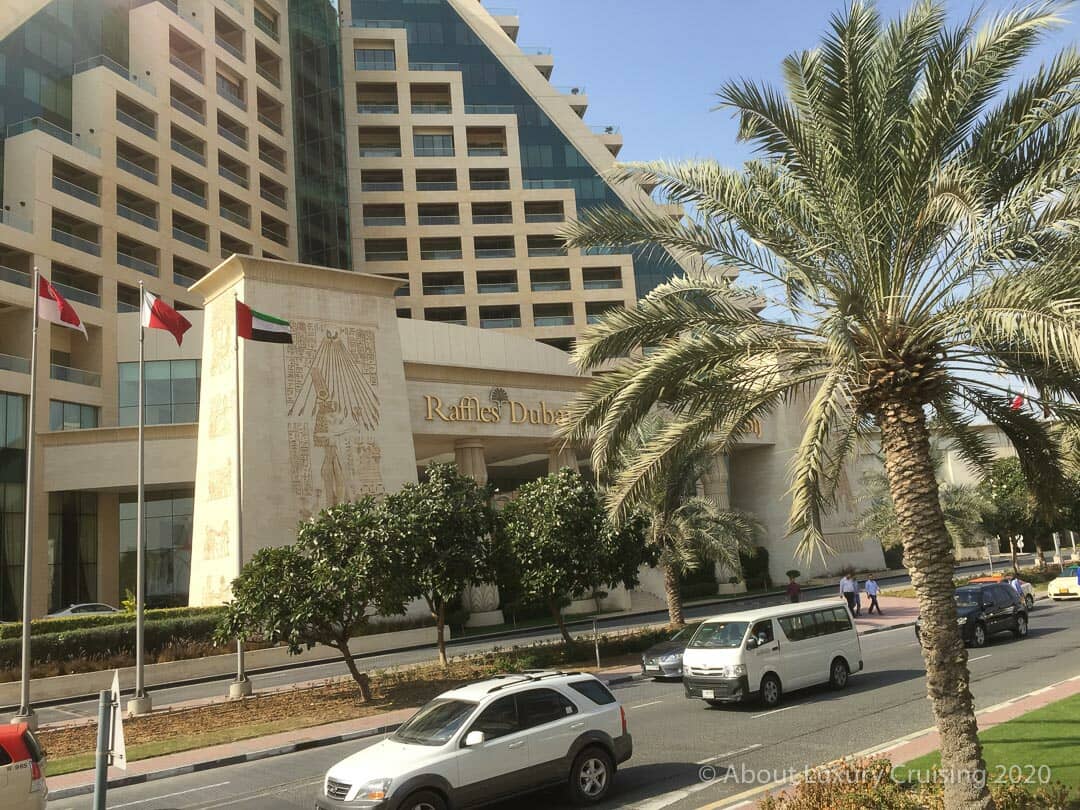 After travelling long distances you want your chosen hotel to “hit the spot”. And so it was with Raffles in Dubai.

The hotel is a true 5 star plus hotel which did not disappoint and in every way reflected what you would expect from a hotel with such a distinguished heritage.

This is what we would class as a city hotel, great for easy access to all that the Dubai city has to offer. Plus, a shopping adventure is just around the corner as Raffles Dubai adjoins Wafi, one of Dubai’s most exclusive shopping malls and Dubai International Airport is only a 15-minute drive away. Inspired by the great pyramids of Egypt, Raffles Dubai is a stunning landmark in Dubai’s skyline. 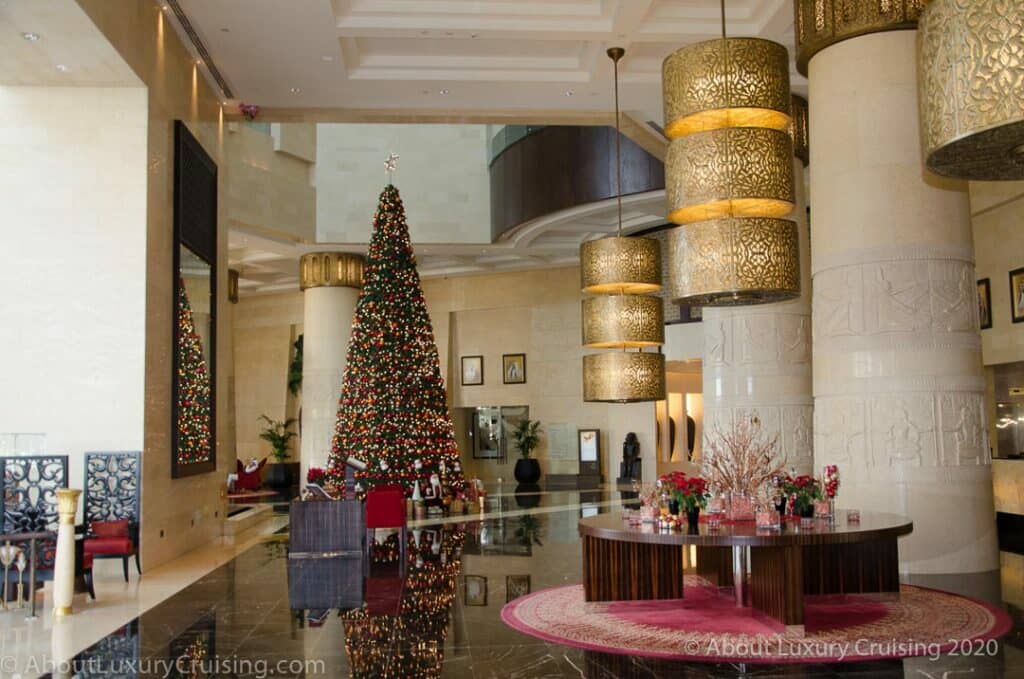 As long as you don’t want to be by the beach, the central location – close to the Old Dubai areas of Deira and Bur Dubai, and handy for the Sheikh Zayed Road malls and financial district – is unbeatable.

Not as fashionable as Dubai Mall or Mall of the Emirates but the adjacent Egyptian-themed Wafi Mall was one of Dubai’s first and is home to 300 shops and many restaurants. 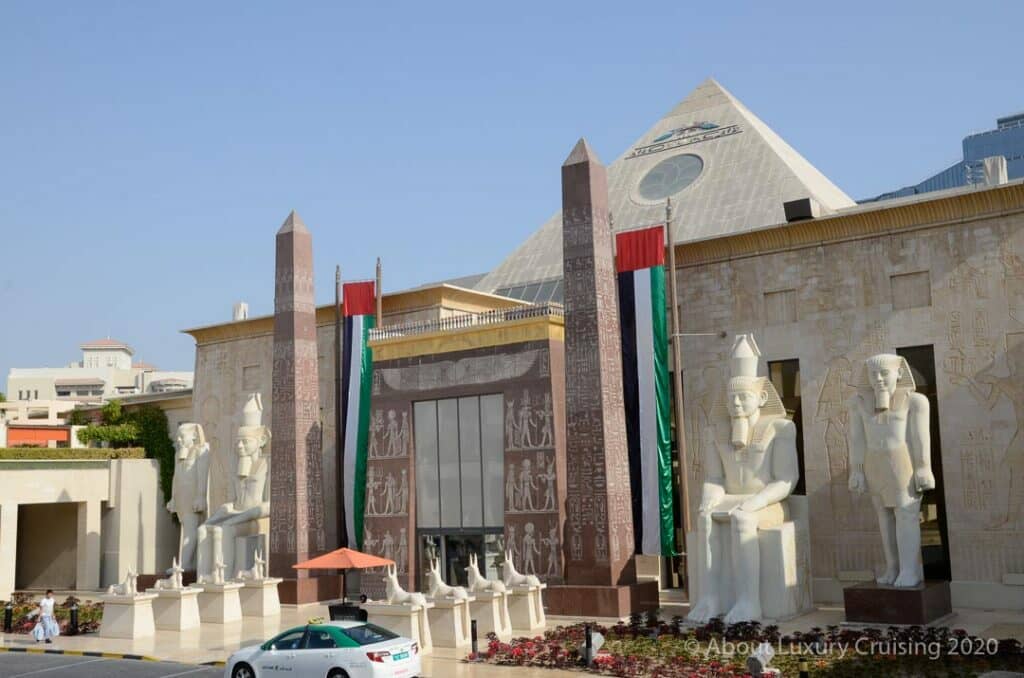 The Egyptian theme won’t appeal to everyone, particularly traditionalists, yet the sumptuous interiors are considerably more tasteful than the exterior suggests. In the imposing marble-clad lobby are enormous round ottoman-style sofas with cushions, massive urns, mashrabiya panels decorating nooks, and pillars featuring carved reliefs of the kind found at ancient Egyptian archaeological sites.

The staff at Raffles must be some of Dubai’s finest, offering the attention to detail like you have never experienced before yet delivering a very discreet and understated service the brand is synonymous with. This explains why, despite scores of properties having opened since, Raffles remains one of the city’s busiest hotels. 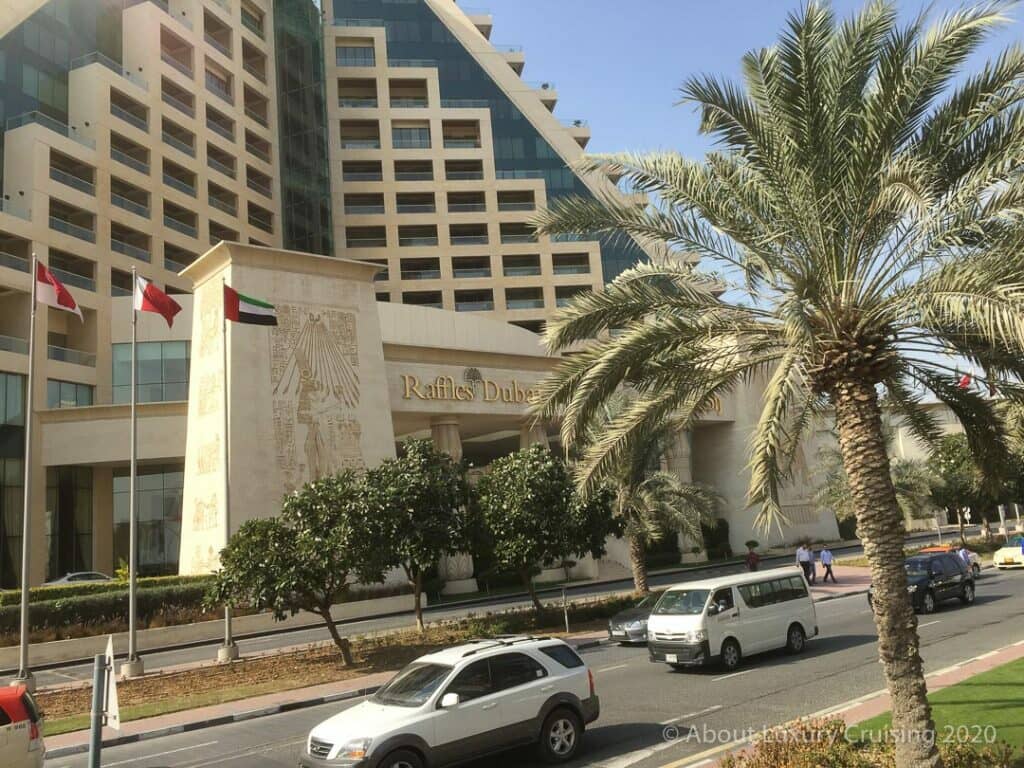 The exterior Egyptian theme is not as pronounced in the hotel’s plush 252 rooms and suites, all of which come with butler service. While more contemporary in style, rooms still feature handcrafted decorative elements, such as the mashrabiya technique used on the bathroom doors and shutters, and traditional motifs on the carpets.

Rooms are incredibly spacious – the smallest ‘Signature Rooms’ start at 70sqm – and boast balconies or terraces. The Diplomatic, Presidential and Royal suites are some of the most indulgent in Dubai. We chose a Suite on the 13th Floor overlooking the city with a view towards the downtown area and the Burj Khalifa which was fabulous. 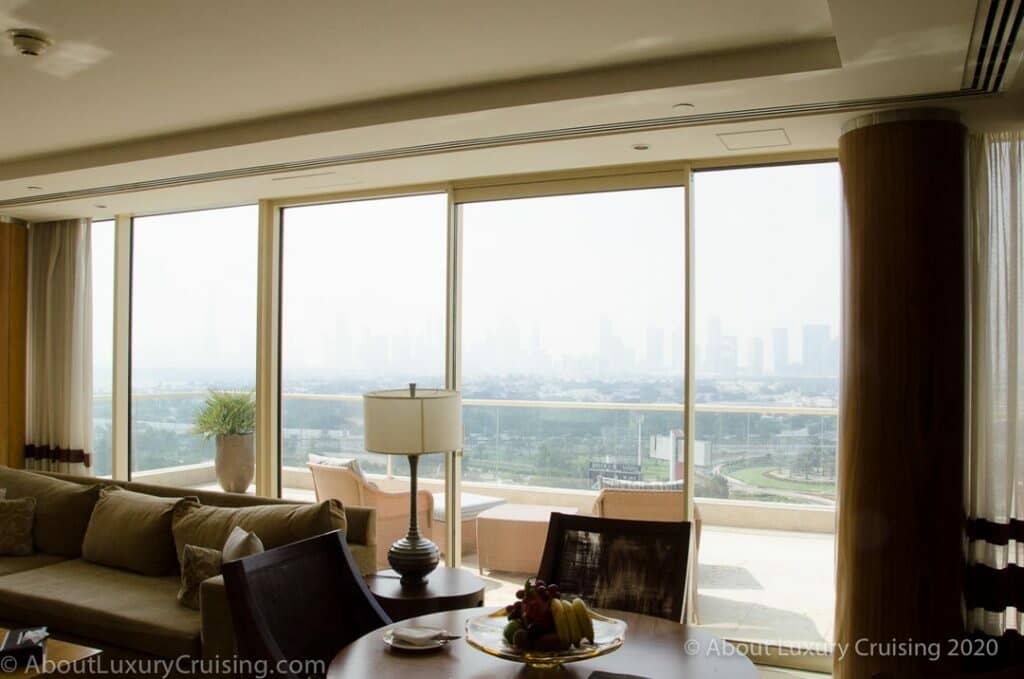 The hotel has many dining venues and we did not have time to try them all . One that was highly recommended was TOMO, a Japanese inspired restaurant at the pyramid’s pinnacle offering spectacular views of the city skyline.

The hotel has many dining venues and we did not have time to try them all . One that was highly recommended was TOMO, a Japanese inspired restaurant at the pyramid’s pinnacle offering spectacular views of the city skyline.

As you’d expect, rooms at Raffles are expensive, but they are larger than most in Dubai and have luxurious extras included like butler service. For extra value we booked a suite which included Club Lounge access with daily breakfast, afternoon tea, cocktails and canapés, complimentary use of meeting rooms, and clothes pressing facilities.

All in all a great hotel if you want to explore Dubai and we look forward to returning soon.