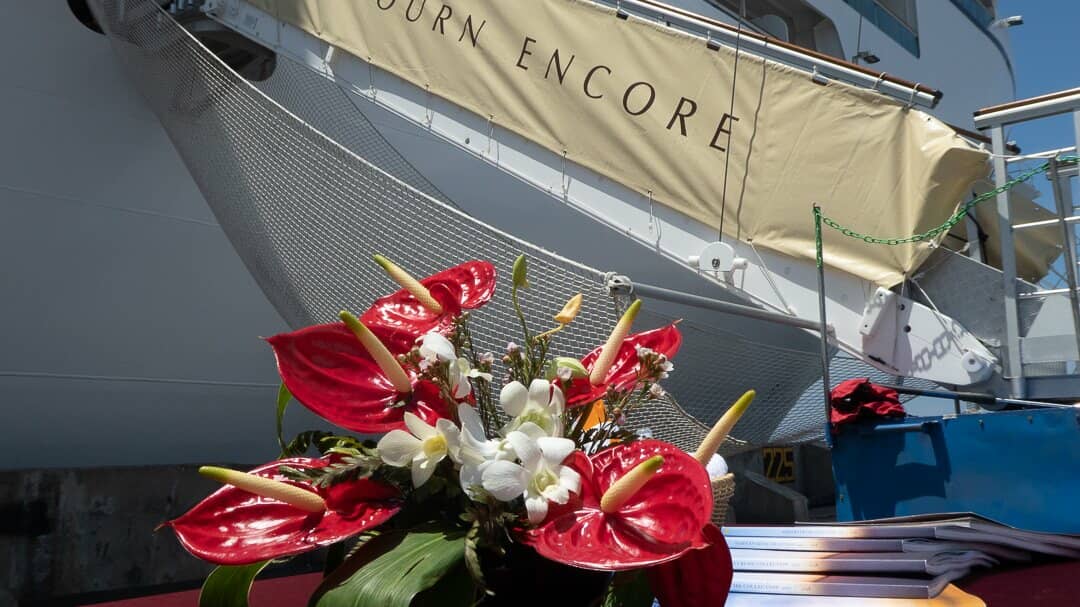 As we expected, the highly anticipated Seabourn Encore, Seabourn‘s newest, ultra-luxury ship launching in 2016, is proving to be in very high demand. Just two days after open bookings were announced for her maiden season, Seabourn Encore‘s 10-day inaugural voyage has already sold out and is waitlist only.

We are thrilled with the overwhelming response we have received for the inaugural voyage of Seabourn Encore,” said John Delaney, Seabourn’s Senior Vice President, Marketing & Sales. “We’re looking forward to providing our guests with the award-winning cruise experience that they have come to love and expect on what will be the most beautiful ultra-luxury ship ever built.

Seabourn Encore will expand and build on the line’s award-winning and highly acclaimed Odyssey-class ships, which revolutionized ultra-luxury cruising with enhanced accommodations and innovative amenities when they were introduced between 2009 and 2011. Seabourn Encore will maintain the line’s high ratio of space per guest, enabling highly personalized service by close to one staff member for each guest on board. A sister ship, Seabourn Ovation, will join the fleet in 2018, and with the addition of the two new ships, Seabourn will have the newest ultra-luxury fleet in the industry.

Seabourn Encore’s maiden season will launch from Athens in December 2016, offering two pre-inaugural cruises exploring the exotic coasts of Israel, Arabia, India and Southeast Asia, providing travellers with a preview of the vessel before its inaugural voyage.

The 10-day inaugural voyage, which went on sale to the public March 3, will begin with a gala naming ceremony in vibrant Singapore January 7, 2017, marking the ship’s official debut. Guests fortunate enough to have landed a reservation will then embark with Seabourn Encore on a 10-day inaugural voyage to Bali, including stops in Surabaya, Java; Celukan Bawang, Bali; and Slawi Bay, Komodo, Indonesia.

Seabourn Encore will go on to spend the remainder of its maiden season operating a series of 16-day voyages cruising the Pacific Rimin Australia and New Zealand, calling at the metropolitan cities of Sydney and Melbourne and exploring both islands of New Zealand. The ship will also visit popular ports, such as Auckland and Wellington, while exploring other picturesque towns, including Oban, New Zealand’s southernmost city, on Stewart Island, and the charming port of Picton, the gateway to the stunning scenery of Marlborough Sound. While the 10-day inaugural sailing is sold out, opportunities still exist to book these other maiden season voyages.

Designed by hospitality design icon Adam D. Tihany, Seabourn Encore will feature modern design elements and innovations consistent with the line’s reputation for understated elegance. The 40,350-GRT ship will be configured with one additional deck and new expanded public areas and is expected to carry just 604 guests, based on double occupancy. In addition, every suite will feature a private veranda.

Seabourn has revealed renderings and updates about Seabourn Encore via a new dedicated microsite: http://encore.seabourn.com. Filled with imagery, details and updates on the ship’s progress, including “sunsets until launch,” the microsite offers an inside look at the most exciting Seabourn launch in years. Additional details, news and images will be revealed on the site on an ongoing basis.